Chairmanda wrote: No big surprise I am fully behind the IN campaign. Briefly, my main reasons are
- free access to a single market of 500 million people
- consistent business laws allowing businesses to grow and create jobs
- protection of rights for workers and customers (would anyone really trust the Conservatives with those?)
- UK citizens being able to live, work and study in any member state without permits or restrictions
- international cooperation against international dangers such as terrorism, climate change and organised crime.
- benefits for UK travellers such as free emergency health care and lower roaming charges.'.

No mention of control of our borders and laws, Manda. I dislike the bureaucracy of Brussels and the difficulties involved in having our own particular needs met. Look at how little DC actually achieved despite inordinate amounts of effort.

It seems to me that advantages and disadvantages are pretty equal, which is why even those who dedicate their lives to politics cannot agree. News outlets are also split.

gloswhite wrote:Yep, Boris. He's rather more astute than many people give him credit for.

Yes Boris is astute but he is only thinking of himself. He has positioned himself to maximise his chances of replacing Cameron as leader of the Tories. If the vote is for Brexit Cameron will have to go and then Boris will take over as his main rivals (Osborne and May) have supported Cameron. If Brexit lose the vote the Tory right will never forgive Cameron and this means Boris has a good chance of taking over when Cameron resigns as he has promised at the end of this parliamentary term.

I agree completely, but there again, he's not going to hang his hat on a campaign that hasn't got at least a fighting chance of succeeding. As you say, he's put himself in a win/win position when it comes to the next PM election.

Lets be honest, if it comes to Cameron v. Boris, there's no doubt old Bojo will do it. Although he's not favourite with the party, but he is with the public, apparently.

Reebok Trotter wrote:Having weighed up all the pros and cons it is an OUT from me. The UK government pays over £200 million a week in subscriptions to the EU. That money would be better spent at home in repairing our creaking transport infrastructure and providing affordable housing.

I don't buy the argument that if we pull out it will seriously affect our trading capacity. It's bullshit. The Germans are not going to stop selling us their BMW's. We are one of the biggest importers of German and French cars and will continue to be, whether we are part of the EU or not.

There are two problems with what you think will happen if we leave the EU.

First we won't stop paying money to the EU. As Norway's Minister for EU Affairs pointed out in an interview in 2015 "Our EEA contribution costs almost as much as EU membership" and the vast majority of EU legislation has been incorporated into Norwegian law despite Norway having no say on the adoption of these laws.

Secondly do you really think a Tory government is going to spend real money on affordable housing or public transport?

Guest
The right wing press love to moan about the crazy laws we get from Europe (most of which turn out to be a load of bollocks), here are 5 good ones -

1. A cap on the amount of hours an employer can make you work

The Working Time directive provides legal standards to ensure the health and safety of employees in Europe. Among the many rules are a working week of a maximum 48 hours, including overtime, a daily rest period of 11 hours in every 24, a break if a person works for six hours or more, and one day off in every seven. It also includes provisions for paid annual leave of at least four weeks every year.

There have been some issues with the law’s revisions, most notably because MEPs oppose the inclusion of an opt-out, which the UK offers its citizens allowing employees to choose not to abide by the rules, as it undermines the protection of workers well-being. There is also an issue around whether being on-call counts as working hours. Parliamentarians believe they do, however this creates difficulties in professions such as medicine which are hard to square with governments.

2. Helping the people of Britain to avoid smoking

In 2014 MEPs passed the Tobacco Products Directive strengthening existing rules on the manufacture, production and presentation of tobacco products. This includes things like reduced branding, restrictions on products containing flavoured tobacco, health warnings on cigarette packets and provisions for e-cigarettes to ensure they are safe.

It is generally believed that minimising the marketing on cigarette packaging makes the products less appealing to children, and given two thirds of smokers start before they are 18 is seen as a good preventative method. Action on Smoking and Health suggests smoking kills around 100,000 people in the UK every year, and half of all regular smokers will die a smoking-related death.

3. Helping you to make the right choices with your food

Thanks to the European Parliament, UK consumers have access to more information than ever about their food and drink. This includes amount of fat, and how much of it is saturated, carbohydrates, sugars, protein and so on. It also includes portion sizes and guideline daily amount information so people can make informed choices about their diet. All facts must be clear and easy to understand.

Labelling of alcohol products, on the other hand, remains an on-going debate between Parliament and the Commission. Providing nutritional information on alcohol products is still voluntary for the time being.

4. Two year guarantees and 14-day returns policy for all products

Consumers across the EU have access to a number of rights, from things which are potentially very useful, to things which used to be annoying. For example, shoppers in the UK receive a two-year guarantee on all products, and a 14-day period to change their minds and return a purchase, these things are useful.

Rules also ban pre-ticked boxes on websites, such as those for additional services – annoying – and also prices have to be absolutely transparent, ie. No hidden costs.

5. Keeping your air nice and fresh (and safe)

Believe it or not, although the situation is improving, some areas of the UK have appalling air quality. A report by the Royal College of Physicians released on 23 February says 40,000 deaths are caused by outdoor air pollution in the UK every year. Air pollution is linked to a number of illnesses and conditions, from Asthma to diabetes and dementia. The report estimates  the costs to British business and the health service add up to £20 billion every year.

But don’t worry, MEPs have your back. Not only have they ensured stringent levels thus far, they continue to work to include caps on an increasing number of harmful substances in the air. These laws have enabled NGO’s to refer the UK to the European Court for failing to reach targets, and the British Government has since outlined plans to improve the situation in future.

READ MORE
David Cameron 'could sack Michael Gove' over support for Brexit
British business makes a strong case on Europe
Why Cameron can't talk about the EU's biggest achievements
Of the 150-200 pieces of legislation which pass through the EU Parliament every year, very few are simply accepted.

Many are amended and improved before being passed in a vote by all MEPs, but it’s also important to note some of the laws Parliament have blocked to protect its citizens.

For example, after years of wrangling Acta – The Anti-counterfeiting Trade Agreement – was rejected by the European Parliament. The proposals aimed to reduce the trade of counterfeit goods, including material online. However, many MEPs felt this would limit people’s freedom of expression on the internet.

Scottish MEP David Martin said at the time: “The intended benefits of this international agreement are far outweighed by the potential threats to civil liberties.

“Given the vagueness of certain aspects of the text and the uncertainty over its interpretation, the European Parliament cannot guarantee adequate protection for citizens' rights in the future under Acta.”

If you think that's sustainable you are bonkers.

Yes, Boris is going to shut the doors.

Guest
Out of interest if Boris did become Tory leader, would you vote for him in an election?

bwfc1874 wrote:Out of interest if Boris did become Tory leader, would you vote for him in an election?

Yes, Boris is a clever bloke.

No doubt you hate him.

Guest
Seems like a good character, certainly don't hate him. But anyone that's seen the amount of 'cast-iron' promises he's broken in London and complete failure to tackle the housing market would be wary of him getting the top job. You only have to look at his move to back the out campaign, it's clearly a poltical move he's spent his entire term in office with the London reception championing the City of London to the EU and relying on them economically. Now all of a sudden he wants out? Another Tory more concerned with his own career than doing what's right for the public.

PLEASE watch this interview with Boris, everybody! It's only about 3 minutes long but will certainly have an effect on your opinions.

Consumers across the EU have access to a number of rights, from things which are potentially very useful, to things which used to be annoying. For example, shoppers in the UK receive a two-year guarantee on all products, and a 14-day period to change their minds and return a purchase, these things are useful.


The first part of this actually does not apply to the UK, secondly you have not 14 days piece of mind but it is now 30 days and only applies to online shopping and not in bricks and mortar stores.

Guest
So you're saying the Sales of Goods Act in the UK trumps the 2 year warranty?

So much for Brussells controlling our laws.

bwfc1874 wrote:Another Tory more concerned with his own career than doing what's right for the public.

Trust me, that isn't just a Tory disease.

bwfc1874 wrote:So you're saying the Sales of Goods Act in the UK trumps the 2 year warranty?

So much for Brussells controlling our laws.

It is now the Consumer Rights Act which replaced the Sales of goods act that came into force last October.

We have never adopted this European 2 year warranty (god knows why!).

bwfc1874 wrote:Another Tory more concerned with his own career than doing what's right for the public.

Trust me, that isn't just a Tory disease.

Saw this on the way to my doctors last week... 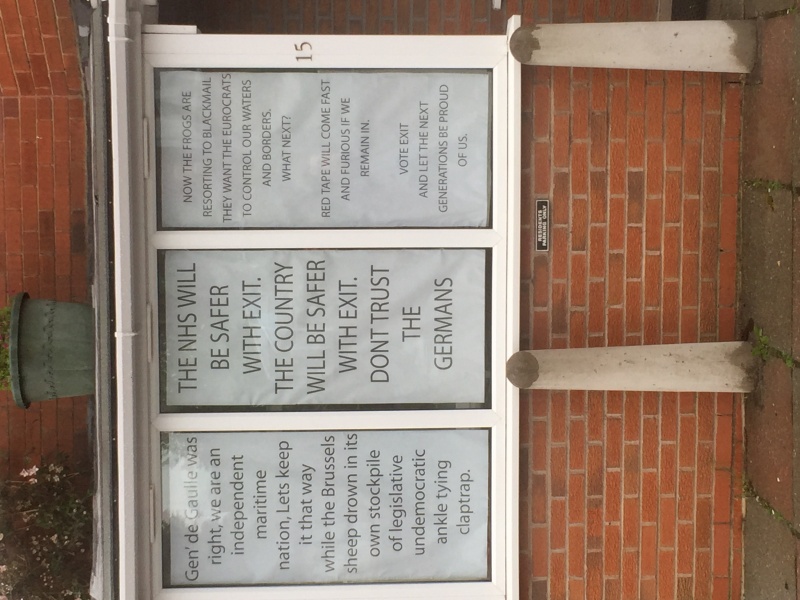 I've had a fair few leaflets through the door recently and they've all been full of reasons why we should remain in the EU. I've not had a single one one stating any reasons for leaving. It all seems very one sided. I know the government are pushing for us to remain but it's hard to make an informed decision when you are constantly bombarded with government propaganda.

karlypants wrote:Saw this on the way to my STD clinic last week...

Did you get the all clear kp or should I get myself checked out?

That clinic must be on one hell of a hill.

» General Election - 8th June.
» June's babe of the month.
» Bolton could be set for a return to League One action in June
» Second EU Referendum
» What has this referendum done to us?