Posts : 751
Join date : 2017-11-21
And he scored a perfectly good goal which was ruled out for not crossing the line.And scored a penalty in the shoot out.He is a big lad with a presence and obviously pace
No harm in giving him a trial

Posts : 3701
Join date : 2012-05-18
Age : 71
Location : Ramsbottom
Usain Bolt at the Macron? I think you are entering the realms of fantasy.
If he ends up playing football professionally, which is very doubtful, it will be in the American MSL where he will play a cameo role

@wanderlust wrote:Fernando Hierro - legend and now manager of Spain for the World Cup!

I guess they are thinking about doing a 'wolves' this season if they carry on splashing the cash.

I also guess Clough and Walker won't be part of their plans next season.

@boltonbonce wrote:A mate of mine sent me the photo below,asking if I had any idea who the away team were. Sunderland being the home team. Any ideas?

I'm not seeing a picture, although I can see you have posted one correctly.

Is the picture 'publicly accessible' or from some private group or other perhaps?

Posts : 24229
Join date : 2013-10-05
Age : 67
Location : The garden shed
He's a dealer,but because I'm a good customer,he's happy to let me see anything he needs help with. I'm posting from my Mac,which usually let's me drag and drop,but I'll download it and try posting it again. 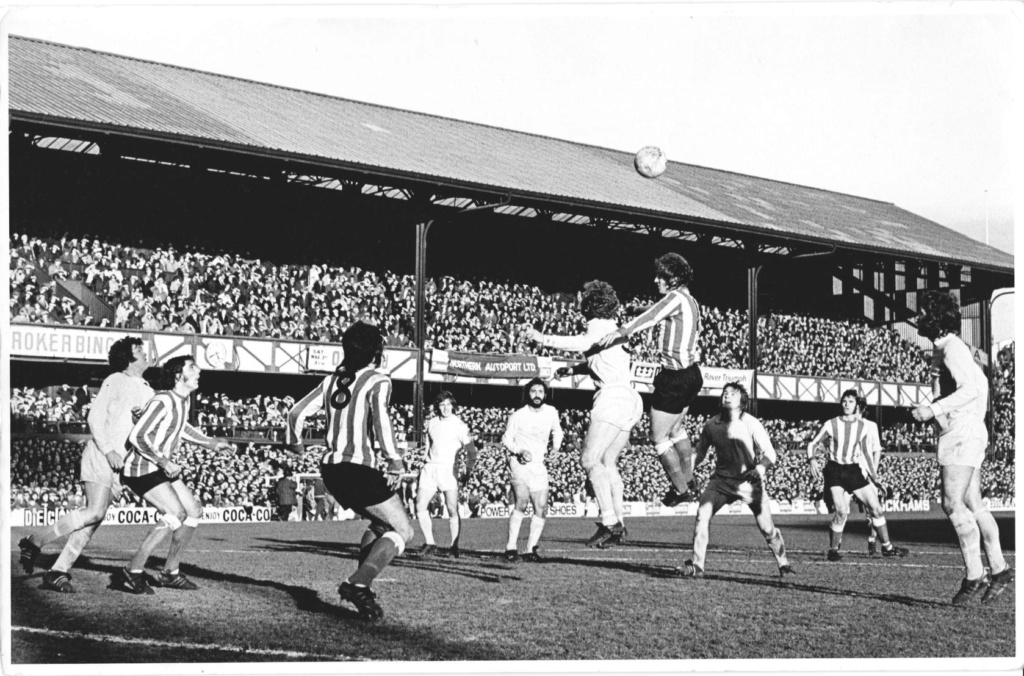 They're my two manservants. Ignore them.

I don't see any slippers, and surely that's well before Boggers time.

Could be Bolton I guess but don't recognise some of the players if it is.

It looks to me as though 'the whites' are defending a corner (or free kick) - the bearded player has a look of Roy Greaves and I guess it could be Willie Morgan jumping on the right?

I wouldn't put money on me being right though.

@boltonbonce wrote:It's a tough one. He said it was 72/73,but we were third division champions that year,and Sunderland were in another division. Maybe he got the year wrong. It's a puzzler.

I remember that season because 'Lancashire' (which we were before the 1974 Local Government reorganisation created Greater Manchester) won all four division titles - Liverpool, Burnley, us and Southport!

The only player I can recognise with any degree of certainty is the left most Sunderland player on the picture - Ian Porterfield. He was there from 1967 to 77 - so that doesn't help at all really! His goal beat Leeds though in the 1973 Cup Final though.

I think the Sunderland player on the right of the picture is big Dave Watson who played for England and later City and Southampton. If I'm right he was there from 1970-75.

The game was certainly played during the day (not an evening kick off) with the Sun being bright but low down in the sky - judging by the shadow lengths.

A random thought I've had, is that if your friend is having trouble nailing the game down to a second division team (as Sunderland were that year) then maybe it was a cup tie and a club from another division?

Sorry I've run out of ideas now - hope he finds an answer to his little puzzle!

Posts : 24229
Join date : 2013-10-05
Age : 67
Location : The garden shed
Thanks guys. I agree it's not Roy Greaves. Looks more like Ricky Villa! The guy who sold him the picture said it was Boro,but a Boro fan he's been in touch with says it certainly isn't.
Growler's Millwall suggestion is a good one,and I'll pass that across. I usually like these puzzles,but this one has me stumped.
Thanks for your efforts though. I'll let you know if anything is confirmed.

Just a thought but could it be Leeds United in the League Cup?

Just a thought but could it be Leeds United in the League Cup?

Was my initial though Peter,but I'm being told it's not. Maybe we'll be proved right. I'm stumped at the moment.

@Norpig wrote:The first but not the last this season, Villa next i bet.

As things currently stand Villa are NOT in violation of FFP YET. Their accounts (apparently) run from September to September (although the tax year is April to April) and since the EFL goes off the club's accounting period (determined by date of incorporation apparently) Villa have until August 31st to bring their 'losses' down to under eight million pounds. Whether or not they can do this is a big question since everyone knows they HAVE to sell players in order to straighten their books so no one is likely to pay actual market value for them.

Seen this before, another copy of it probably. Initially had it down as either Middlesbrough, Orient, Bolton or Preston, but it's now believed to be ….

In the background (behind Billy Hughes' head) you can see advertised SAT 3rd MARCH O____D which was Oxford on 3rd March 1973. Sunderland played Middlesbrough on 17th Feb, Reading on 3rd Feb (FAC) and Millwall on 27th Jan.

Middlesbrough collector I know said he didn't recognise anyone in white. Bolton collector the same. Reading would surely have been in their blue & white hoops. As they played Orient in August and Preston in December they surely wouldn't have been advertising the March fixture then.

So it rather left Millwall as the only likely opponents, in their all white kit with no badge. But we still weren't sure as we couldn't positively identify any Millwall players.

Having said all that, Derby's suggestions hold some water and they played Brighton on 6th Jan, which is possible, but Huddersfield in April and Sheff Weds in September so the ad rules them out.

Posts : 24229
Join date : 2013-10-05
Age : 67
Location : The garden shed
Thanks for your efforts Growler. According to the back of the picture it's Boro,but Boro fans are saying it isn't. Millwall came up too,and,and I'm leaning toward them myself,but we still have no definitive answer.
I'm sure I know the guy behind Ian Porterfield,but his name won't come. I'll keep trying.
Thanks again mate.

Posts : 17898
Join date : 2012-01-12
Perhaps you could post the picture on a Millwall fans forum and ask the old codgers on there if they recognise the players?

Posts : 17898
Join date : 2012-01-12
Premier League transfers haven't been as dramatic as previous seasons with only West Ham and Wolves bringing in a load of players. Biggest surprise is Joao Moutinho signing for Wolves - I know they have great connections in Portugal but it's still a real coup. Still time for more, but not much.

@wanderlust wrote:Premier League transfers haven't been as dramatic as previous seasons with only West Ham and Wolves bringing in a load of players. Biggest surprise is Joao Moutinho signing for Wolves - I know they have great connections in Portugal but it's still a real coup. Still time for more, but not much.

Lusty does the shortened window actually apply to the Prem? As I understand it it was only the EFL that was subject to it on the grounds managers wanted to have finalised squads before the season kicked off but the Premier League was staying with the European window.

@wanderlust wrote:Perhaps you could post the picture on a Millwall fans forum and ask the old codgers on there if they recognise the players?

It doesn't look like its Millwall, as someone has pointed out there is a clock on the stand with the time at 4.40pm.
There is no chance of it being so light at that time in late January when they played Millwall.

It could  be the Oxford match on 3rd March

Posts : 17898
Join date : 2012-01-12
Leeds looked good under El Loco today. Not much of a change in personnel from last season but a helluva change in performance to dispatch promotion favourites Stoke. A team to watch out for this season.