That's what I thought too. Lampard Senior and horse trainer Mick were never in doubt but Pop Robson took a bit of thinking about.

Posts : 640
Join date : 2017-08-17
Pop Robson had a successful partnership at Newcastle with former Wanderers favourite Wyn Davies.
He was also quite keen on ping pong and met his wife to be, Maureen Hepple, on the table tennis circuit. Maureen was an English international. Here's a photo. Its not hard to see the attraction:

Posts : 640
Join date : 2017-08-17
Here's a gathering celebrating Big Wyn's 73rd birthday. Look out for the Northern Rock and Wonga shirts. Oh dear! But does anyone recognise the venue?

Posts : 640
Join date : 2017-08-17
Their is a likeness but these are Newcastle supporters who travelled to Bolton to celebrate Big Wyn's birthday. Might be wrong but could the venue be the Pack Horse?

@Ten Bobsworth wrote:Their is a likeness but these are Newcastle supporters who travelled to Bolton to celebrate Big Wyn's birthday. Might be wrong but could the venue be the Pack Horse?

I reckon it is.

@Sluffy wrote:Chester Barnes was the only table tennis player I was really ever aware of.

That's what he was known for, the only ping pong player that anyone had heard of. But there are a couple of more recent vintage who are quite well known.

Sky Andrew is an agent who represents/represented Sol Campbell, David Ginola, Frank Bruno, Sarah-Jane Mee and quite a few others.

Matthew Syed is an Oxford-educated journalist, author and broadcaster. He's also unsuccessfully tried to get into Parliament coming third as a Labour candidate in Wokingham in 2001. He also got on the short-list for selection as a candidate in Middlesborough South in 2010. Teesside has been a ping pong hotspot in the UK for about a half century but it was local lad,Tom Blenkinsop, that got the nod and got elected.

Blenkinsop decided to stand down in 2017 because he said that he could not campaign for Labour while Jeremy Corbyn was party leader.

Kevin Davies has revealed how Bolton boss Owen Coyle keeps his players in line – by thrashing them all at table tennis.

Coyle joins in squad competitions and is unbeaten at ping-pong, all part of the team-building that team captain Davies says won’t be derailed by this defeat.

Bolton were desperately unlucky not to get a point at the Stadium of Light after squandering late chances in a period of dominance that Coyle said was “like the Alamo”.

England striker Davies said: “The manager is a very infectious character and wants players to have a smile on their face. He has great enthusiasm and it rubs off on other people. He demands a lot from his players but he wants them to enjoy themselves and express themselves when they play and work.

“It is difficult in football to keep 25 grown men happy. No one is happy when they miss out but he has a knack of keeping everyone happy.

“You see it in games when the subs come on and they are given a chance to make an impression.

“When we come in on a Monday morning – and it will be the same this week – you can never tell whether we have won or lost. This one is a difficult one to take. We have only really lost to the big teams but we will get back together and get ready for West Brom on Boxing Day.

“The fact we are disappointed with this defeat shows how far we have come under Owen and now we have to bounce back.”

Davies also revealed: “I do not play table tennis very often. I got my arse spanked a couple of times by him. He is a very competitive guy. He does not like losing at anything.

“It is great that he can have that sort of relationship with his players. There are no cliques. Everyone gets involved and it is the same in training with little competitions and stuff like that. It is a great place to be and go to work at.

“The way he runs things is right up there with the best I have known.”

As it happens, I played a game of doubles yesterday with my son and two grandchildren.  Made me laugh when grandson 1 described me and him as the 'dream team' but we won - just.

If I'm not mistaken this young man was later helped by Lennie Hepple, the lovely Maureen's dad. 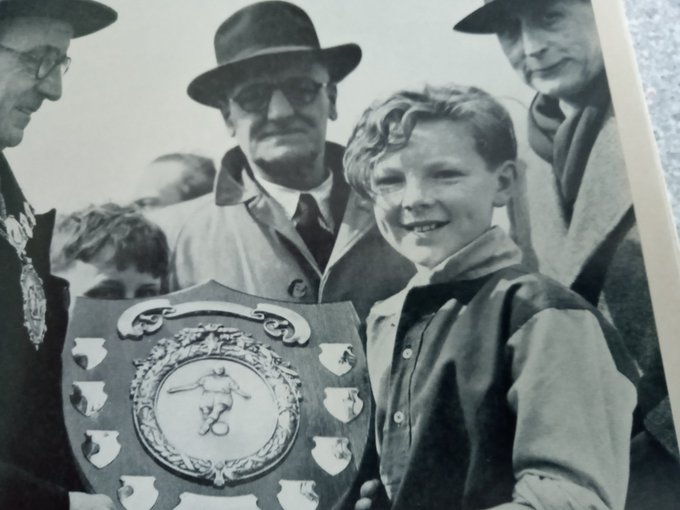 That's what I figured.

Speaking of the lovely Maureen, there's a nice article written by Michael Parkinson published in Table Tennis News in 1974 entitled 'This isn't the game my bird played'.

All a matter of taste, of course, but however old it is, I'd sooner read Parky any day of the week than the daily dose of dreary dross served up in the Bolton News.

@boltonbonce wrote:I heard a story, from an England team mate of Moore, that he used to iron his money.

I prefer to remember him for something else.
Anyway, who is this former goalie who was goalkeeping coach when Chester Barnes trained at Highbury?

I should know this one but I don't. Ex-Wales and Arsenal goalie, Jack Kelsey, came to mind but I'm not sure.

Posts : 640
Join date : 2017-08-17
Photo of the day from Chester B is for Nuts racing experts.
Who is the dapper geezer on the left, the bespectacled gent on the right and the lovely horse in the middle? Not being a racing expert, I only recognise one but we may be talking about the winners enclosure at the Grand National here. 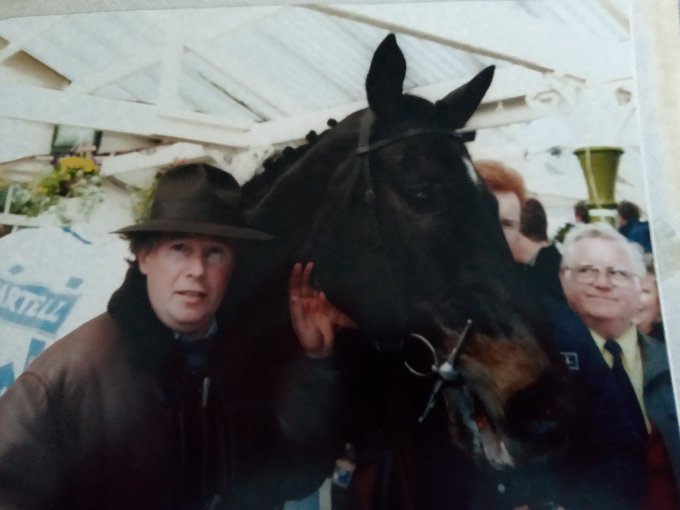 @boltonbonce wrote:Struggled with this. Guy on the left has a look of David Coleman, but I'm pretty much stumped.

I see what you mean but the guy on the left is none other than our hero, Chester Barnes hisself. Looks quite the part, don't he?
My next question is, who has seen this film? If you haven't you've missed a treat.
https://www.youtube.com/watch?v=4FANGIUNbiA

@Ten Bobsworth wrote:Their is a likeness but these are Newcastle supporters who travelled to Bolton to celebrate Big Wyn's birthday. Might be wrong but could the venue be the Pack Horse?

I reckon it is.

So do I. Here are a few photos of Bolton's old haunts including the Pack Horse. How many remember Tognarellis? Busy place but not many blokes in there.

Anyone recognise the cool dude in the shades in Tiggis or the other guy who looks like he could be the Major in Fawlty Towers when a bit younger?

Admin
Posts : 17413
Join date : 2011-12-29
Bob (and anyone else who may not know) if you want to post a YouTube video rather than link to it, all you have to do is click on the little You Tube icon on the bar you see when you are writing your post and stick it in there instead and job done!

Easy when you know how.

As for Tognarellis, that was the place my parents used to take us for a treat to get ice cream milk shakes.

Used to be on the first floor above Burton's (or was it another tailors shop back then?) The entrance used to be off Market Street.

Happy days remember from a long time ago.

@Sluffy wrote:Bob (and anyone else who may not know) if you want to post a YouTube video rather than link to it, all you have to do is click on the little You Tube icon on the bar you see when you are writing your post and stick it in there instead and job done!

Easy when you know how.

As for Tognarellis, that was the place my parents used to take us for a treat to get ice cream milk shakes.

Used to be on the first floor above Burton's (or was it another tailors shop back then?)  The entrance used to be off Market Street.

Happy days remember from a long time ago.

Thanks Sluffy. I've only just stopped using a quill pen and getting used to these new fangled things is proving a bit tricky. I have to get help from the grandkids.

It was above Burton's and the entrance, I think, was adjacent or near to Brown's Trimming Shop and a record shop. I remember Frankie Vaughan paying a visit when he was in his prime. This is Frankie with Marilyn Monroe round about that time.

Frankie was evacuated from Liverpool to Lancaster during the war and joined Lancaster Boys Club.I believe that's where he first performed and later, when he was successful, he set aside a week every year to fundraise for boys clubs.

One of the events was the Frankie Vaughan Pro-Celebrity Golf Tournament held every year at Hillside Golf Club, Southport. I played in it myself on a few occasions once partnering Wyn Davies and on others, Kenny Dalglish, Alan Hanson and Duncan McKenzie. Bill Beaumont took over as the Tournament's figurehead after Frankie.

Posts : 640
Join date : 2017-08-17
Chester's posted a photo of Ray Reardon today but as its signed 'Ray Reardon' there doesn't seem a lot of point in asking who it is.
Instead here's a nice picture of Chester's two cats. Can you name them? 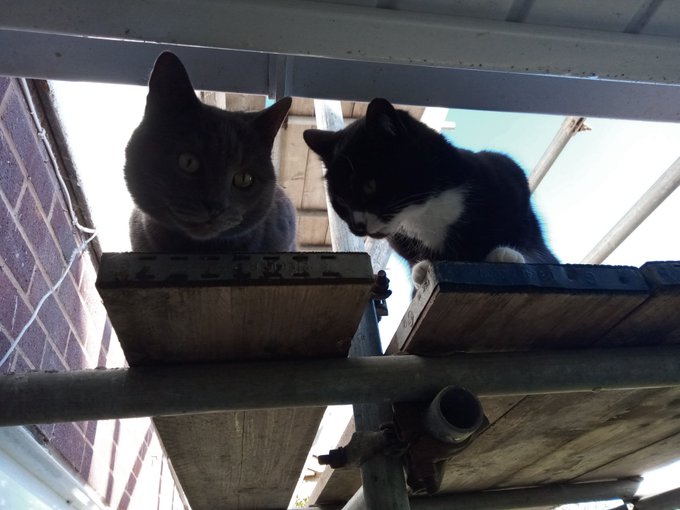 A bit unfortunate for Pong but it got me thinking about footballers with unfortunate names. Starting with Shittu and Dodoo, there's Dickov and Goodwillie, Windass and Arshavin, Fuchs and Kuntz and slightly before my time, former Scottish international, Bob Smellie. Any more?