Like to keep you folk up to date with the latest from our tax-dodging hero.

Apparently Burger King brought out this new 100% beef-free burger two or three months ago which was referred to the Advertising Standards Agency (ASA) because some people might have assumed it to be vegan.

However Burger King failed to make it clear that it was dressed with an egg-based mayonnaise and vegans could have been struck down with some life-threatening illness if they had made the fatal mistake of buying one from the well-known burger eatery.

Our hero was on to it in a flash denouncing those evil Burger King charlatans of dealing in 'whopping whoppers'.

All hail, Prince Dale, all round good egg and defender of the faith!

This is where you should be posting Bob. You started the thread.

We can all play somewhere else.

Did I mention that another two directors of Ecotricity Group have collected their P45s? That's three in six months including yet another Finance Director. Curious that FD's don't seem to stick around long.

All you Dale Vince followers should be getting your NoKenDo shirts out again today because LowTaxDale is being celebrated on BBC Radio 4 tonight along with FGR's newly-appointed Artistic Director, Rob somebody or other.

Who needs a Finance Director when you can have an 'artistic' one instead?

Good old Auntie Beeb. She knows what's good for us.

I'm a vegetarian. I've adopted a pig. You should all do the same. Doesn't have to be a pig of course.
I'm also funding the retirement of a bullock.
My dad, a butcher, always felt I'd let the side down.

It seems our hero's been on Talksport too today. How does he do it? How come nobody asks him the questions he ought to be asked?

Never mind, the lamb chops and sausages were nice as was the Chilean pinot noir.

You couldn't make it up, but a document was filed at Companies House yesterday, only FIVE AND A HALF YEARS LATE, which showed that Ecotricity Group bought back 20 x 1P shares for £7MILLION.

What does it mean? It means Dale Vince, the man who threatened to liquidate BWFC and isn't interested in money,  pocketed £7MILLION of the company's money.

Just imagine if Ken Anderson had done summat like that.

Has he broken the law?

You'd need an investigation to prove that.
Were the shares worth that?
Was there an independent valuation?
Why did it take over five years to make the declaration?
When was the Stamp Duty paid?
Were there other legal requirements that weren't fulfilled?

Thought I'd take a look at how much profit Ecotricity Group's made since Mr Vince's £7million for a few of its 1P shares.

It did make a profit in one year (or that's what the accounts said) but losses in all the other three with Finance Directors coming and going faster than footie club managers.

There's an interesting note in the 2017 accounts of the Ecotricity Group to the effect that unbilled gas income had previously been overestimated by £11m.

In other words the previous accounts weren't correct and profits had been overstated by a substantial amount (probably over several years).

So how was the valuation of £7million for a few 1P shares calculated?

Summat not right in the lives of folk who are tweeting at 2 o'clock in the morning, if you ask me, but 'ar Dale's no lie-abed. He's up tweeting again this morning telling all his fans he agrees with David Conn. No surprise there but when those two agree on anything it needs looking at carefully.

Liverpool fan Rick Parry thinks its great. Vince agrees with Parry and Vince speaks for the Football League's clubs or that's what he thinks and so, it seems, does Talkshite. The barsteward's on again this afty.

The Ecotricity Group had a new Finance Director when its 2017 accounts were signed off in January 2018. Karen Coombes had been in place for only a few weeks and was destined to be in her job for less than a year.

Those accounts reported a loss of £19m with a note that £11m of the loss related to previous years because the amounts of unbilled gas supplies had been consistently overstated. One might wonder how you can run an energy supply business properly without having a reasonable handle on how much the unbilled gas supplies amounted to at any time let alone a year end when the figures are required to be calculated and audited.

But that's what the accounts said. Did anyone notice? Surely someone must have; the £11m was more than enough to wipe out all the declared profits of the previous five years with room to spare.

The losses in 2017 were followed by more reported losses in 2018 and 2019 but what else was happening in this eight years of loss making, amounting to £21.5m in total?

What's this got to do with Bolton Wanderers? Not too much except that Dale Vince was the one who branded Ken Anderson a rogue owner and threatened to put BWFC into liquidation.

It's not exactly Vince related but it is about a liquidation of a company (well two actually) one of which was a famous sportsman's company to "exploit his name and image rights" non other than the people's cycling hero Bradley Wiggins, who I always had my doubts about, even before the infamous jiffy bag affair.

Bradley Wiggins liquidates businesses with debts of over £1m

Creditors expected to be left out of pocket as Team Wiggins company folds.

It's quite a long read and probably of little interest to most but I do hope Bob see's it and does find it as something he might like to read. 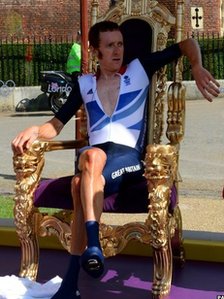 I doubt he will need to get on his bike to earn a crust.

Always thought he was a prick.

He appears to be having a mid life crisis. New bird in tow.

He’s enjoyed a week’s respite and would recommend it to anyone.

Bob never did care much for Sir Bradley of Wiggins so hasn’t spent any time on him but he has taken a quick look at a company called MUCS Enterprises Ltd. Bob knows what MU stands for and doesn’t like it much. Well he doesn’t like it at all to be perfectly honest.

You’ll have to make up your own minds about the CS bit but MUCS is owned by Saint Marcus of Rashford and makes large amounts of dosh presumably out of his ‘image rights’. Nearly £4.5m pre-tax in its first three years but recently Saint Marcus seems to have been focusing on the virtue signalling side of the operation.

You might have to wait a bit for the most recent results as MUCS usually files its accounts in Fergie time. MUCS has a cash mountain but has also helped Saint Marcus out by providing him with a £396K interest-free loan.
https://find-and-update.company-information.service.gov.uk/company/09551906/filing-history

And Bob says he’s all in favour of free school dinners. He says he’s not got where he is today without the nutritious and character building qualities of frogspawn, dead man’s leg and dead fly pie.

Bonce sends Bob his best wishes, and hopes he had a productive break.
Bonce also wishes to concur with Bob's views regarding free school dinners. Bonce is the man he is thanks to dead fly pie in particular.

I'm Joe Biden, and I approve this message.