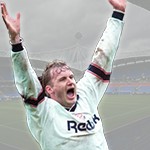 Posts : 12071
Join date : 2012-07-19
Age : 40
Location : Halifax
THE shine of Darlington’s FA Cup victory at the weekend evaporated last night when their match with Boston United was abandoned due to a serious injury sustained by Nicky Hunt.

Hunt accidentally collided with the opposition’s Joe Leesley in the build-up to Boston’s second goal in the 87th minute.

The game was abandoned by referee Adam Williamson with the score at 2-0, and the National League will have to decide whether the result stands or a replay is required.

But the scoreline was of secondary importance to those involved at Blackwell Meadows.

The collision, which also saw Tony McMahon close by, saw Hunt fall backwards onto the turf and he did not move for over an hour while an ambulance was called, with players from both sides shocked by the incident.

Medics including Quakers physiotherapist Danny O’Connor, club staff and players gathered round the stricken Hunt, who joined Quakers in the summer from Crewe Alexandra.

He was taken from Blackwell on a stretcher at 11pm, around 90 minutes after his fall. It is unclear exactly what the injury was, but it is understood to be a spinal issue.

The sombre scenes brought an early end to what had been a disappointing display from Darlington on the back of Saturday’s surprise 2-1 success at Swindon Town.

Darlington were sluggish at the start, unable to get into their flow and Boston took an early lead, Jordan Burrow with a powerful header after sneaking into space inside the 18-yard box.

The striker connected with Connor Dimaio’s right-wing cross to make it 1-0 after eight minutes.

Quakers very shortly almost let in another, Andi Thanoj’s corner was pushed away on the line by Johnny Saltmer and then Dimaio’s low shot was blocked by Hunt.

A great chance for an equaliser was wasted by Sean Reid. With only the goalkeeper to beat, his shot was too close to Ross Fitzsimons.

The second Boston goal was not dissimilar to Adam Campbell’s winner on Saturday, Fraser Preston’s shot taking a major deflection off Michael Liddle to wrong-foot Saltmer.

But what happened to Hunt in the build-up was the only cause of concern.

Taken to hospital after lengthy treatment

We would like to update you on the serious injury to Darlington defender Nicky Hunt.

Following an incident on the field near the end of the match, Nicky was left unconscious and needed lengthy treatment for a head injury from the physios of both clubs and medical staff.

He was taken to hospital at 11pm by ambulance.

We would like to thank the excellent care and prompt action which was taken by the physios of both clubs, and the Darlington FC safety staff and stewards.

Our thoughts are with Nicky and his family.

We will update everybody when we can.

We are pleased to inform everyone that following a scan on his head and neck at North Tees Hospital early this morning, Nicky has been given the all-clear.

He was released from hospital at around 5am, and he returned home to rest with his family.

Once again, we would like to thank the physios from both Darlington and Boston who gave Nicky so much care and attention on the field, their professionalism prevented the situation from getting even worse, and also to the medical staff for their attention.

As well as playing for the Robins Nicky will be joining Michael Clegg's backroom staff as a first-team coach. pic.twitter.com/8FYLRwRwY6