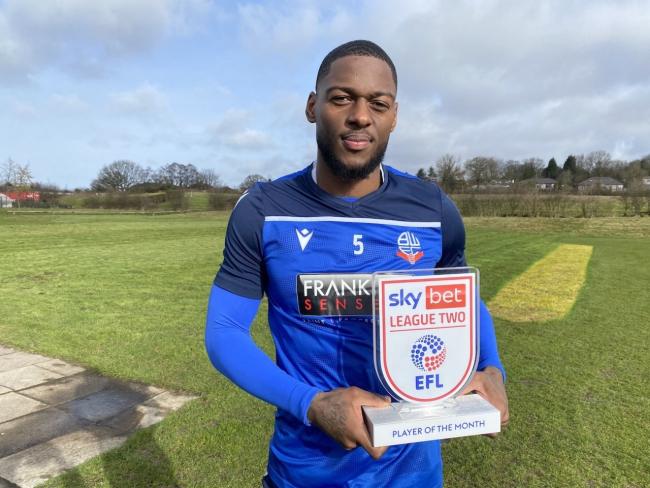 Ian Evatt has labelled newly crowned player of the month Ricardo Santos as "outstanding", but urged the defender and his team-mates not to rest on their laurels as Wanderers bid to maintain their promotion push.

Bolton celebrated a double with manager Evatt also picking up the League Two manager of the month prize for a February in which his side earned 16 points from a possible 18 and kept four clean sheets on their way into the top seven.

But while the Wanderers boss dedicated his award to his staff and the team, he was most pleased for Santos.

“I’m delighted because Rico has been one of our most consistent players all season and, as a fellow centre-half, it’s good to see that centre backs are getting awards like this because they normally go to strikers," said Evatt.

"It's great to see a centre half get that award and for me it's thoroughly deserved for the way he's played. He's been outstanding. But he has to keep it going. There's still loads more to come from him."

That message extends to the rest of his players for the remaining 12 games, starting with tomorrow's trip to Port Vale.

Wanderers were on the wrong end of a shock 6-3 scoreline on that occasion, ironically when Evatt had overseen an unbeaten November to earn his first manager of the month award of the season.

He feels his side have come a long way since then.

"I think (we have) a better squad of players, first and foremost, that have a good understanding of what we want from them," he said.

"And then I just think the culture of the club in general has changed. The feel day to day - playing staff, coaching staff, non football staff, football staff, all the directors are all now pushing and pulling in the right direction; the same direction. And when you win games and have that environment and culture it inspires belief and confidence, and that's what we've got at the moment.

"We've got a very confident team, which is playing very well. They're rightly getting plaudits for how well they're playing, but we're not resting on our laurels because I know there's loads more to come. I genuinely know there is more to come."

Evatt added: "They are enjoying themselves, and if you're not enjoying yourself right now as a Bolton Wanderers fan or player or coach then we're at the wrong club because we haven't had anything like this for a long, long time.

"We've all suffered this season, we've all been criticised - rightly so, because for Bolton Wanderers it wasn't good enough - but I always had a belief in myself and the players that we would come good once we got through that January window, and now all of a sudden they're doing really well.

"But, it's only now. We've still got 12 games left, that's more than a quarter of the season. So just keep going, keep our heads down, keep working hard, and just win the next game."

Remember when we all thought he was shite?