Social Media - A Blessing or a Curse?

Just seen this report (link below) stating that the Indian Government has told social media firms in their country to remove all mention of 'Indian Varient' from their content in relation to the Covid strain.

China did the same but since we've had the Kent (English) variant, the Brazil one and the South Africa one - and nobody seems to been bothered about their 'names'.

There is in my opinion an awful lot of naive/gullible/uneducated/stupid/etc, people on social media but there are some that make the whole thing worthwhile by giving a voice to those who otherwise may never have one.

There's no law about being naive/guillible/etc, but there's something badly wrong when states begin to control them to repress freedoms such as speech.

Then again is it right that people like Trump and Maugham can equally mislead and manipulate people on social media to their own ends?

Should states interfere in other country's elections by using social media for instance.

Should fake news be allowed to be spread so quickly such as QAnon, anti-vaccination, and all the other stuff that does more harm than good.

How do we find a balance between freedom and censorship, informing and manipulating, communicating for good (knowledge, information) and for bad (abuse, racism, etc).

Is social media a blessing or a curse?

Both. Depending on what your own aims, views, and requirements are. Other than closing it all down, there really is no way to fully control it.

gloswhite wrote:Both. Depending on what your own aims, views, and requirements are. Other than closing it all down, there really is no way to fully control it.

So if we don't want to close it down then isn't the only alternative not to believe social media without checking it out for truth, context, completeness, lack of bias, relevance and accuracy first...

...rather than believing someone you don't know from Adam - who wrote something on a forum/Twitter/Facebook/etc - and taking that as the gospel truth???

Its definitely turned into a curse for Ollie Robinson. Some very bad taste messages here especially about Gary Speed. 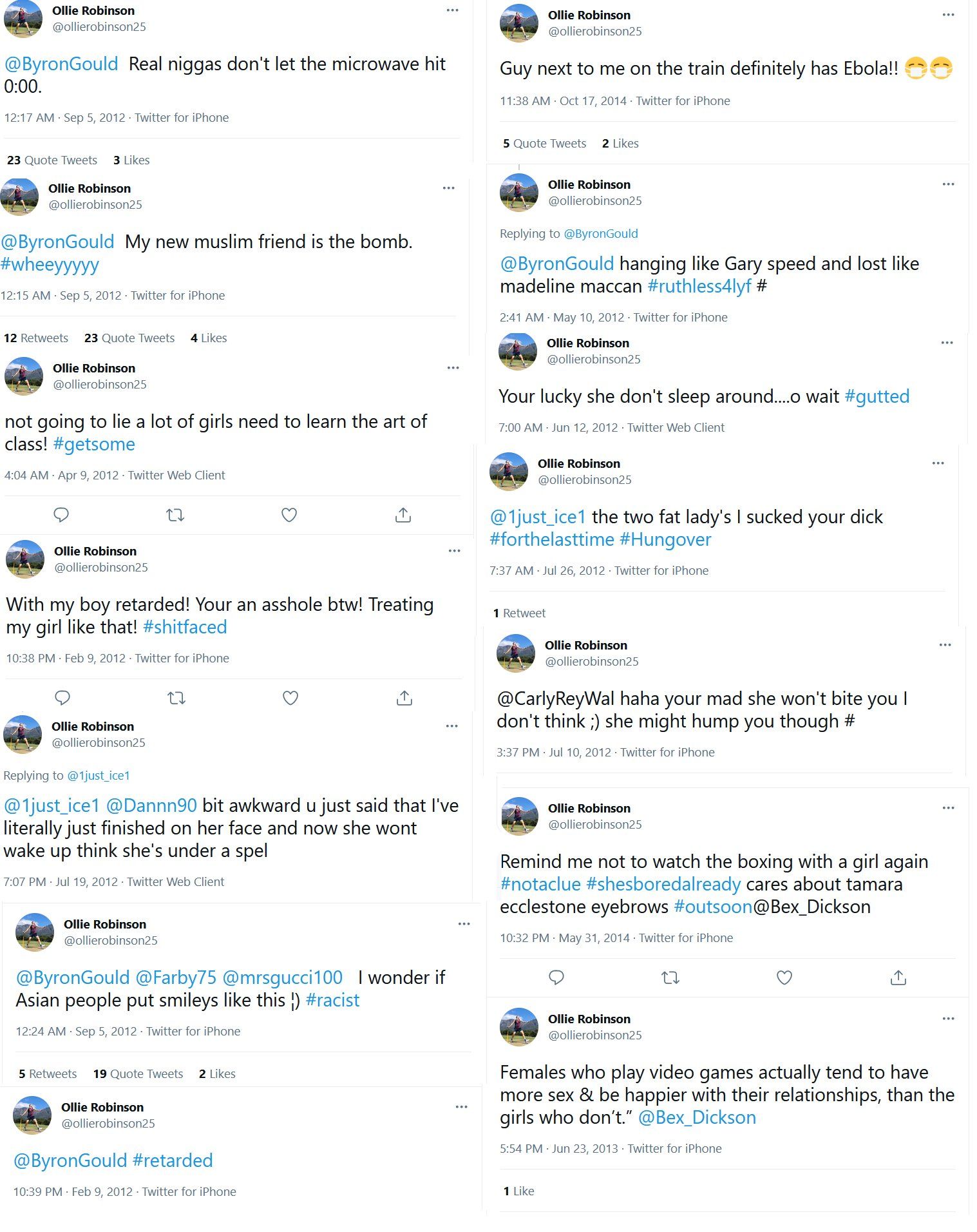 He came out and read a prepared statement, clearly written by someone else, containing the usual platitudes. Hey ho.

its a sad state of affairs that as soon as people get any success then someone is delving through their twitter account to rake up some dirt.

I'm not condoning his messages by the way but we've all been 18 or 19 and said and done stupid things haven't we?

boltonbonce wrote:He came out and read a prepared statement, clearly written by someone else, containing the usual platitudes. Hey ho.

Apparently he was 19 when he said what he did.

He was clearly a dick back then.

The question is, is he still a dick and still believes such stuff or has he grown up since then and now knows much better?

We'll probably never find out for sure but let's give him the benefit of doubt shall we?

I guess no similar remarks found since he was 19 (he's now 27) seems to suggest he might have?

Also his team mate is the respect Barbados born cricketer Chris Jordan, it will be interesting to see what if he says on the matter.

Well obviously I've been 18 and 19 and have don't stupid things in my time (probably still do) but I don't believe I've ever been hateful to others in any way?

I've obviously be shaped by my upbringing and the society and culture which has been around me during my life but I was always taught to respect other people and to treat a woman properly (I still open doors for women even to this day for example).

I've mentioned before my best mate at school was a recently arrived Asian who I befriended and fifty years on my best friend now happens to be a Pakistani Muslim.

Maybe if I'd been raised differently or in a different setting and culture I would have been different in the views and ways I have, I don't know?

Alternatively I guess I could have always rejected my parents input and rebelled against the norms of the society I was in - but it never occured to me because I never felt what I was doing to be wrong - nor the people around me to be hostile to how I was/am.

I'm not claiming I'm a saint or special in anyway, there most be millions of people like me, it just seems that since the advent of social media that hate and prejudice can be spread vastly and quickly and gives a voice to all the haters out there and which influences the multitude of ignorant and stupid folk out there that read such shit.

Christ a bloke from Singapore has just pleaded guilty to sending death threats by social media to Premier League footballer because he scored a goal ffs!

Just been reading another nutjob on social media - this time a Bishop would you believe!!!

So easy to post their personal prejudice and influence others to think the same way.

Not surprisingly (to me anyway) they were factually wrong in what they even said in the first place!!!

So much for believing what people say on social media as gospel (so apt too in the case!). 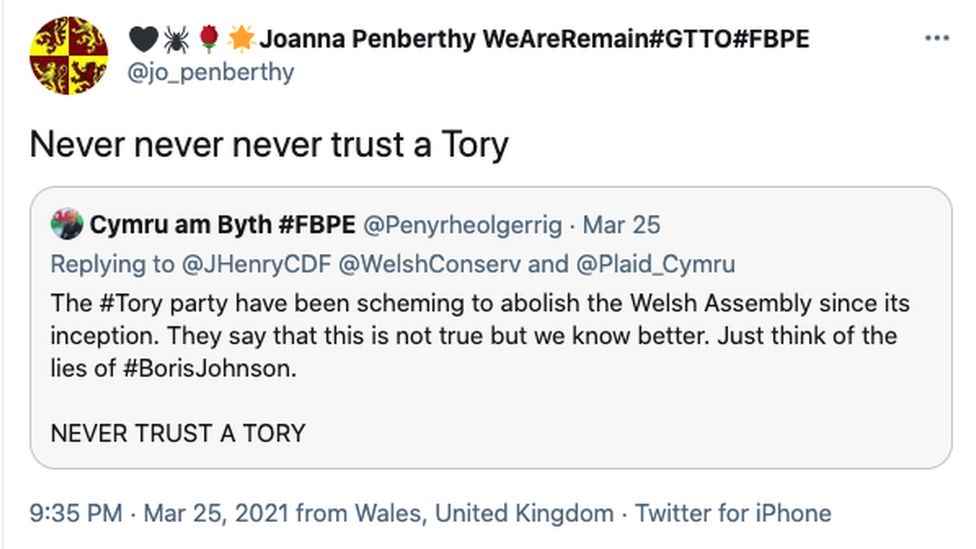 The bishop has been a prolific poster on the social media site, under the name: Joanna Penberthy WeAreRemain #GTTO #FBPE.

The abbreviations stand for Get The Tories Out and Follow Back Pro European.

These tweets to her though made me laugh!

Leading Leave Brexit campaigner and Conservative commentator Darren Grimes responded: "All of the Conservative voters who look to you for spiritual direction deserve so much better."

Mark Wallace, the chief executive of the Tory news site ConservativeHome, added: "Lucky you don't have a job that supposedly involves understanding others... oh wait."

In a statement, Dr Penberthy said: "On 25 March 2021, I put out a private tweet about Conservative Party supporters which has caused offence and for which I sincerely apologise.

"I, of course, trust and have trusted many Conservatives and know there are many honourable people in that party."

The bishop then apologised for other tweets she had posted "which may have caused upset and offence".

She added: "While I hold strong political views, I have expressed them on Twitter in a way which was both irresponsible and disrespectful and I deeply regret this."

Social media is whatever you make of it. People are the problem.

Re: Social Media - A Blessing or a Curse?