boltonbonce wrote:I wonder if we'll get our friend Manda back on board. As an ex chairwoman of Bath City, maybe she could throw some light on financial matters at that end of the spectrum.
I know she was busy in 2020, having been elected the Mayor of Bath, but now that's come to an end, maybe she'll once again grace us with her presence.

Got it now, Boncey. That would be this Manda Rigby:

Manda Rigby said: "My business acumen and knowledge of football are the equal of any man.

Is she, by chance, any relation to the ST's supremo. He'd invite you to 'draw your own conclusions' if you asked him how BWFC spent its money.

A love of hot Vimto's nowt to worry about, Boncey. It sounds like one of her more endearing qualities, if you ask me.
I hope you're keeping your eyes peeled for all those pesky balance sheets inadvertently left at bus stops up and down the country.

Bob, you'll be pleased to learn that Marcus is now a scarecrow. He's part of the Lymm scarecrow trail 2021. 44 scarecrows were entered, 45 until they realised I was only looking, with prize money to boot.
Marcus looked great.

But I'm not too sure about Greta.

I quite liked the Greta one, Boncey.

Lest I forget, the red warning signs gone up at Companies House on FGR too.

Guess what? FGR have filed their 2020 accounts. Late but not as late as FV's, who still haven't filed.

Looks like Cousin Vinny squeezed £250K and a hug out of Auntie Sharon over the Doidge affair and they pulled in another £434K in furlough grants.

FGR also make whacking great charges to other companies in the Ecotricity (now Green Britain) group. They don't say which companies but it was £2.6million in 2020 and £2.7million in the previous year. Doesn't half make your P&L look better.

Meanwhile, down in Derby, the Rams haven't filed their 2019 accounts yet and have been ordered to redo three years of their accounts.

TWE*Pmeister Maguire was busy on Twitter yesterday when FGR filed their accounts (late).

Surprisingly he spotted that FGR have been charging Ecotricity £millions to make it look like they were making a profit when they are really making losses. He didn't put it that way, of course, but you wouldn't expect him to, would you?

No wonder Conn likes him. TWE*Ps of a feather.

I thought I'd have another look at FGR and Ecotricity now that FGR have filed their 2020 accounts.

The Ecotricity Group has reported aggregate losses of £27.6million over the last ten years of which FGR's reported losses account for £12.8million. Look a bit closer and you see that over recent years FGR has been bumping its 'commercial' charges to Ecotricity averaging over £2.5million for the last three seasons but probably aggregating £9million+ over ten years.

What does this mean? It means, if you believe the figures, that the vast majority of Ecotricity's losses are down to FGR whilst it has been borrowing money hand over fist, now including government-backed COVID loans.

Nethen Messrs Conn, Maguire et al, where have you reported any of that?

I saw this earlier today. I’ve done Saint  Marcus and there’s not a lot more to say. There was  one
bit that interested me but no point going there.
It looks like somebody might have bailed Evil Dance out though. Please tell me it wasn’t more COVID cash.


Vince is vegan alright and running up massive debt and spending other people's money is sustainable as long as individuals, bankers and the government are daft enough to keep lending it, but ethical?

Red Nev wants a revolution because that Digby Jones bloke doesn't like dodgy diction. He doesn't mean  our new goalie, does he?

Anyroad it looks like Red Nev's mate, Cousin Vinny, is up forrit. He's retweetin, bless him.

Lord Digby Jones ! Just say that name to yourself a few times ! He has a say in how our country operates .

I’m actually starting to see how revolutions occurred ! Are you ?

Often heard Jones on 5Live's Wake Up To Money on my way to work. Never impressed me. This is him listening to Fred Dibnah. 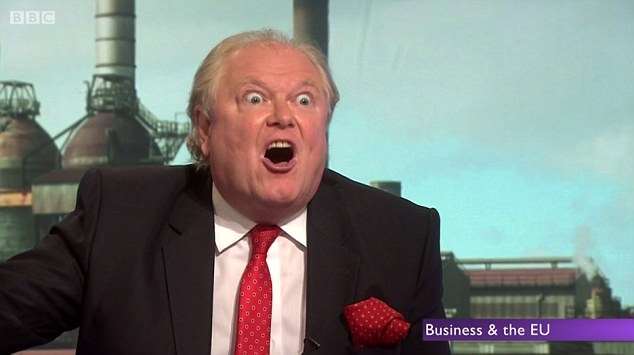 boltonbonce wrote:Often heard Jones on 5Live's Wake Up To Money on my way to work. Never impressed me. This is him listening to Fred Dibnah.

I can’t honestly say he’s  impressed me either, Boncey, but are you up for Red Nev’s revolution? We must save dodgy diction

Ten Bobsworth wrote:
I can’t honestly say he’s  impressed me either, Boncey, but are you up for Red Nev’s revolution? We must save dodgy diction

Might make cop shows a bit iffy.
"Right you chaps, this gun is loaded, so put the money in the bag I've provided. Failure to comply will make me very angry indeed, and I'm not sure I can handle the stress. And no funny business you rascals".

boltonbonce wrote:
Might make cop shows a bit iffy.
"Right you chaps, this gun is loaded, so put the money in the bag I've provided. Failure to comply will make me very angry indeed, and I'm not sure I can handle the stress. And no funny business you rascals".

I fink we might need to call in Diction of Dock Green to teach us all to talk proper, innit?

Very good, Boncey, but this one takes some beatin (silent 't')

Back to Red Nev, I got an invite to this shebang.

Did they really think I'd travel to London to listen to this leg end?

I gather Cousin Vinny was on Channel 4 news last night describing how he can save the planet by using grass as a power source. I don't expect Guru-Murthy asked him about the £millions in interest-free loans Vince has taken out of Ecotricity but I wonder if Dale's thought of selling this grass idea to Ecotricity for a few million quid to repay the money he still owes it.

Meanwhile it seems that his former legal eagle, Tom Cowling, has got a new job with a company that makes batteries called Power By Britishvolt based in Blyth. I see that Lord Peter Selwyn Chadlington is also a director. He sounds like someone who has stepped out of a P G Woodhouse novel but Boncey's more likely to remember him as Selwyn Gummer.