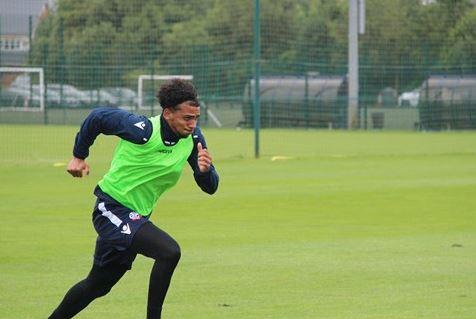 Xavier Amaechi has been sent to a specialist to determine the extent of his metatarsal injury and how long he will be ruled out of action at Wanderers.

The Hamburg winger limped out of last week’s 1-0 win against Preston North End and has since had scans to see the extent of the damage.

Ian Evatt fears the former Arsenal man has broken a bone, which is likely to keep him out for six weeks, but is still hoping for good news from the doctors early next week.

“It looks like there is a crack there but we’re not 100 per cent sure,” he said after the win at Barrow. “He’s going down to London to see a specialist on Monday and we’ll have a clearer idea of the prognosis and how long that’s going to be.”

Evatt has already hinted that a long-term absence for Amaechi may mean he shifts transfer targets in the final few weeks of the window.

The Bolton boss still wants to bolster his attack but may need to bring in a right-sided player to compensate for Amaechi’s injury in the opening couple of months of the season.

“We’ll have that final answer on Monday and we’ll decide what we’re going to do from there,” he said. “Things change day to day at the moment so we’re still on with other stuff, of course, and making potential lists.

“We have potential lists ready to go, so we’re just going to buy a bit of time really over the weekend.

“We’ve got the open day (on Sunday) which will be fantastic and then we’ll have a clearer idea of Xav on Monday, but fingers crossed and we hope for the best.”

Wanderers have already brought in attacking talent in Amadou Bakayoko and Dapo Afolayan this summer, and also had a strong interest in Manchester United’s Anthony Elanga, who had been made available for loan at Old Trafford.