Antoni Sarcevic plans to fly under radar in League One 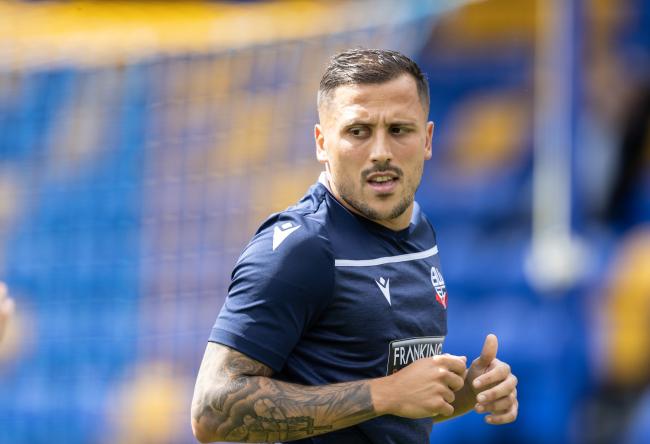 Antoni Sarcevic would like to see Bolton Wanderers become the silent assassins of an ultra-competitive promotion race this season.

When 24 League One club writers were polled a week before the opening game, just one picked the Whites out to go up automatically, or via the play-offs.

That was mirrored in the bookmakers’ odds, with Ian Evatt’s side sitting among the dark horses on the shoulder of those with bigger budgets and more obvious financial pressures.

It is a stark comparison to 12 months ago when Bolton were the big fish in a small League Two pond. Neither dressing room nor manager made any secret of their lofty ambitions, but that same hubris ended up working against them during a difficult opening few months.

This summer, there has been less talk, more action. And Sarcevic feels the business-like approach could stand Wanderers in good stead when they come up against play-offs hopefuls like Oxford United and their previous opponents, Lincoln City.

“I would rather be the silent ones in the league and coming to places like Lincoln with people knowing we’re a force, knowing we can take care of our business, but doing it quietly,” he told The Bolton News.

“This club speaks for itself with the fanbase and the size of it – but this is a level-headed group, we’ll keep going.”

League One has already shown its unpredictable side in the first three games as fancied Ipswich and Charlton wait for their first win, while Burton Albion boast a 100 per cent record.

It is a division of fallen giants and aspirational names and Sarcevic believes it will be the most closely fought too.

“Everyone was saying before the season that this would be the one to watch and some of the results with the bigger teams have already shown you don’t know what is going to happen,” he said.

“When you come up to League One and make mistakes, teams will punish you.

“Last year you could get away with certain things. In this league there is better players who will pounce on those little errors.

“But there are plenty of big clubs around in this division, Bolton are one of them, and it isn’t an easy on to predict at all.”

The performance and a clean sheet at Lincoln on Tuesday night has given a confidence boost after two high-scoring draws against MK Dons and AFC Wimbledon, where some of Bolton’s defending was called into question.

“I think we have cemented ourselves as a team to watch,” Sarcevic said. “We beat a good club like Lincoln, took over their place and dominated the game.

“It’s Oxford next and it’s exciting. They are the games you want to play in and why we worked so hard for promotion.

“Lincoln were unlucky not to be in the Championship this year but I think everyone saw what we were about.”

Sarcevic came up with the winner on Tuesday night, stealing the goalscoring spotlight from his midfield team-mate Josh Sheehan, who has caught the eye since his summer move from Newport.

“We played against him last year and knew he was quality,” the captain said. “He came in and settled and I was joking with the gaffer that he was getting in all those nice positions – so I’m happy I did that and grabbed a goal this time.

“If I don’t score another one this season but I can help the team get results, then I’m happy. It is not all about goals, it’s about what you do on the pitch.

“Everyone can see what I do to get a win, and it’s for the boys and for the club.”

That team ethic is another factor Sarcevic feels will be important in the coming months, as Ian Evatt looks to keep a competitive squad in form.

“If you are going to compete in League One you need a great group of players,” he said. “The gaffer said in the dressing room after the game that the lads who weren’t involved have a massive role to play – it’s a long season and as long as they keep on top of things, we’ll be OK.

“Those on the pitch set the standards and they have to carry that on. A good squad will bring a good season.”