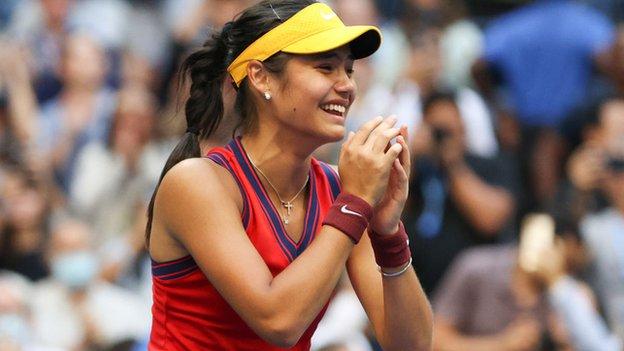 Sensational! The level of play from both girls was very special. Hope more people are inspired to take up the sport or at least follow it on TV and in person. The consistency of power and accuracy was exceptional. Look back at old videos of women's tennis and witness how much the quality has improved. These two will almost certainly contest the final stages of more grand slams in the future.

The other young lady? She can play tennis alright but what a little madam. Her and her 'team' had faces that could turn milk sour.

Wow! She was sensational. 18 years old and played like a seasoned veteran to win the U.S. Open as a qualifier without dropping a set in the whole tournament. Nothing seems to phase her in the slightest.
I'm not a betting man but give me any sort of decent odds for her winning BBC Sports Personality of the Year and I'll be in there. Who the hell could possibly compete with Emma's achievement.

Fernandez is a great player and as the non qualifier possibly expected to win having beaten some great players en route. She obviously wasn't happy the way it went as for both players it was possibly their only chance to win a major. But in the scheme of things in women's tennis we ended up with two players who weren't given a chance and I'm sure the ranking players who weren't injured or had a stinker will be having a say in things going forward.
But to see Radacanu - ranked 338 in July - to get to the last 16 of Wimbledon and then do this (which will put her into the top 30) - was unique and probably the fastest rise in tennis history, even though it was years in the making.
The match was excellent in terms of contrasting styles and abilities so I hope to see a rerun some day - but I'm not betting on it.
A truly extraordinary event a la Leicester winning the Prem.

I didn't see much of a difference in their "styles and abilities", Lusty. Pretty sure that they will both go on to win (more) majors. Their rivals, even Barty, are very inconsistent or past it, and these girls have everything they need to achieve more success.

I thought the crowd were pretty polite and appreciative of both ladies, whereas the crowd for the men's final were an utter disgrace, actually booing, whistling and shouting out when the Russian, Medvedev, was trying to serve out for the match. He did very well to ignore the appalling abuse and close out the final few games to win in straight sets against Djokovic.

I fear similar loutish behaviour from a partisan American crowd in the forthcoming Ryder Cup.....a bit like our yobs at football matches!

I didn't see a lot of difference in styles either but there was one nagging difference.
Why could I not help thinking of Tonya Harding v. Nancy Kerrigan and Bad Santa?

okocha wrote:I didn't see much of a difference in their "styles and abilities", Lusty. Pretty sure that they will both go on to win (more) majors. Their rivals, even Barty, are very inconsistent or past it, and these girls have everything they need to achieve more success.

I was thinking that Fernandez was marginally more powerful, was more inclined to go for the angles when the opportunity arose and is of course a leftie. In her earlier games, she swung the ball and used the angles more - but of course she could only play what Radacanu gave her to play and she was given very few opportunities being pushed back to the baseline so often.
If Radacanu can keep opponents at the back of the court all the time she'll do really well - but she has yet to go up against the big guns and I'd be surprised if she wins anything else for the next few years. Maybe later depending on who else is coming through.

Who are these "big guns", Lusty?

Was Olympic champion, Belinda Bencic, not a big enough scalp for Emma's talent to be proved in straight sets.....Fernandez too?
Barty may have something to say in the near future but she looked brittle in this tournament.

Raducanu has beaten the 2017 US Open champion, Sloane Stephens, in the first round of this year's Australian Open in Melbourne.

It's beginning to feel as if she may possibly become a "Big-Match" player, having overcome some indifferent recent form in lesser events. Good temperament in sport matters such a lot when the presure is on.

Got something to admit, big-mouth Piers Morgan?

I loved seeing Emma Raducanu win the US Open last year.
It wasn't just the winning but her grace, intelligence and the sheer joy of her personality.
I hope she goes on to have a long and successful career.

Cajunboy wrote:
It wasn't just the winning but her grace, intelligence and the sheer joy of her personality.

Yeah - that's exactly what I liked about her too