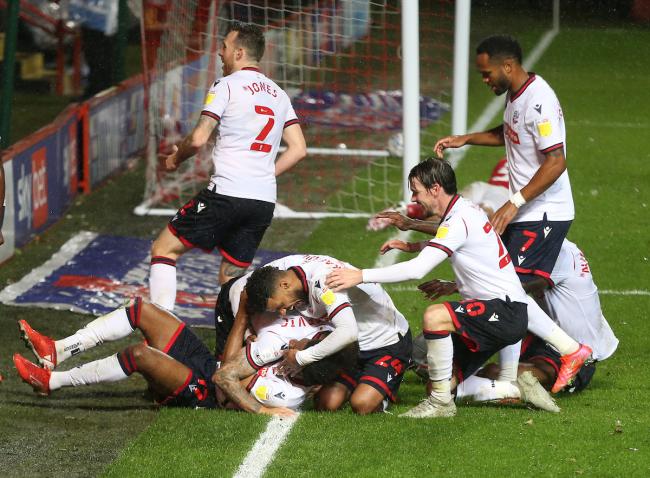 A half-time rollocking worked wonders for Wanderers as they romped to a 4-1 win at Charlton Athletic.

Ian Evatt was not happy with the intensity his side showed in the first half despite Dapo Afolayan cancelling out Josh Davison’s early goal for the Londoners.

And though the game remained finely poised for around an hour, Wanderers eventually beat down Charlton’s door with two goals from Kieran Lee and an injury time strike for Antoni Sarcevic.

“It has been coming,” Evatt said. “Did we play as well as we did on Saturday? No. But football is a funny game and I thought we started the first half well, we were confident on the ball.

“We gave away a poor goal, as we have been doing at the moment, but then gathered ourselves and grew into the first half.

“What you have to remember is – and our fans have been brilliant, by the way, and really bought into what we are doing – but the reason we are passing it around at the back is to tire out the opposition.

“I don’t care who you are, you can’t press the ball for 90 minutes.

“Once we have earned the right by moving them side to side, we were clinical.”

Evatt showed his displeasure in the half time interval but got the perfect response.

“They got a rollocking, a roasting, because we are better than that,” he said.

“And then once we raised in the intensity teams can’t live with it. That’s the outcome, that is what we can produce.

“We need that intensity from minute one but that is not easy. And you have to remember we are still a work in progress and there is loads more to come from this group. Performances can still be better.

“But when we play with that speed and intensity, teams can’t live with us.”

Lee scored his first goals of the season after making only his second league start – and having made four changes on the night, Evatt was delighted by the way his new-look team handled the second half.

“I am delighted for him and we have a joke, it has been a long time coming. Obviously he was unlucky with the Burton one,” he said of Lee, who saw a goal controversially ruled out at the UniBol earlier this month.

“I have got a really strong squad of players and I trust them all. I decided to make changes because it was a really tough game on Saturday, a physical one, and a long journey. They all took it the right way and the ones who came into the team did exactly how well I thought they would."

A travelling army of 888 Wanderers fans braved the elements - and Evatt was full of praise for the backing they gave his side on the night.

“It is amazing that they have travelled this distance on a Tuesday night in these conditions, with no fuel, most of them must have electric cars. The connection and bond is there for all to see – they are really proud of us and we are really proud of them.”