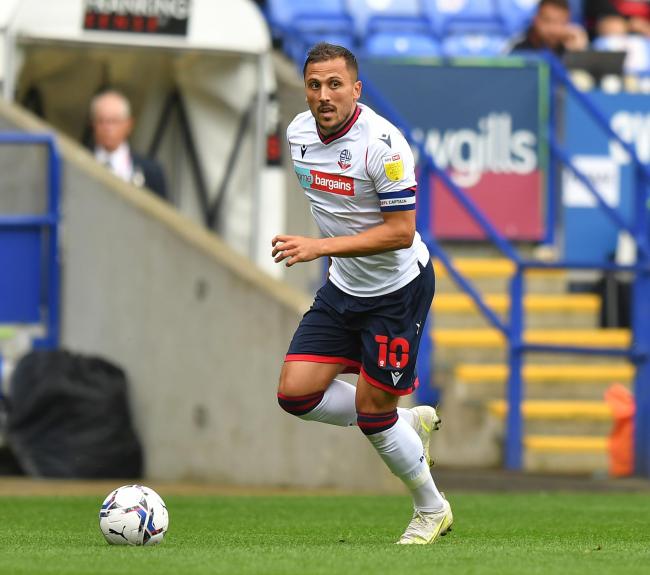 Antoni Sarcevic is confident he is pulling his weight as Wanderers look to break into League One’s top six.

Ian Evatt’s side entertain Shrewsbury Town looking to build on their comprehensive 4-1 victory at Charlton Athletic in midweek, capped off by a late strike by the club captain.

Sarcevic netted his second of the season at The Valley but says the goal should not be interpreted as some sort of response to a small number of vocal fans who have criticised his recent performances.

Evatt had brought the matter up in his post-match interview at Charlton, insisting both the captain and striker Eoin Doyle – who has also come in for stick in some quarters – are giving everything to the cause.

But Sarcevic said he was shocked that there would be any sort of negative discussions with the Whites on the fringes of the play-off places.

“If the armband means you have to score, have to assist, then fair enough. And I feel like I have dealt with it OK over the last 18 months,” he told The Bolton News. “But we came up a league and doing well and yet there is an air of negativity.

“I didn’t know until I saw after the game that the gaffer had to stick up for me, it was a bit confusing. If we were sitting bottom, fair enough, but I feel like the season is going well and things are brilliant.

“I think if you asked the 11 lads on the pitch if you should change a player based just on goals and assists, 99 per cent of them would say no, because it’s more than that.

“Goals and assists, brilliant, they get the headlines, but there is a reason why this is a team game.”

Sarcevic admits some comments aimed at him and Doyle have “got his back-up” but he feels his performances this season have more than warranted a place in the side.

“We’re creating a lot of chances. We are a good attacking team,” he said.

“I saw something about my defensive duties and if they are in question then you’d have to see my running stats, and I think I do OK with those.

“Myself, I go home every day and I am furious I haven’t scored but it’s part of the game. There are pros on £150,000 that haven’t scored this season.

“It doesn’t affect the team, which is all that matters, and we are doing well.”

Sarcevic prepares to face a former club in Shrewsbury, and one he left under a cloud in early 2016 after cancelling his contract.

The 29-year-old says he has moved on from the issues that made his life on and off the pitch difficult in Shropshire and does not look back with any anger.

“It was probably a move that shouldn’t have happened and I have been over it loads of times, it wasn’t a good time for me,” he said.

“But I don’t have a bad word to say about Shrewsbury, I really don’t. the fans will have their view, I have mine, but it has gone now. It was years ago.

“They are a well-run club but I am captain of Bolton Wanderers now, a special club, simple as that.”