Action man Bakayoko won't be easing his way in at Wanderers, says Evatt 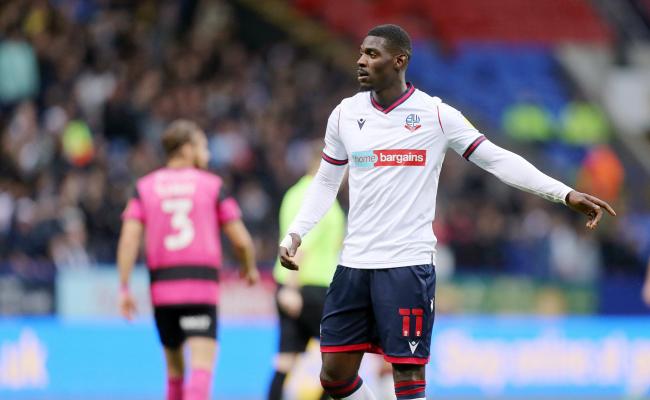 Amadou Bakayoko won’t be easing his way back into first team action at Wanderers.

Ian Evatt reckons now his all-action front man is fit again after several weeks on the side-lines with a calf injury he is itching to make up for lost time.

Bakayoko is likely to feature in tomorrow night's Papa John’s Trophy game against Liverpool Under-21s at the UniBol as he edges towards full fitness.

Evatt is now backing the striker to continue the fine form with which he started the season, admitting he was left speechless by his energetic cameo against Shrewsbury at the weekend.

“He is a big player for us because he offers something completely different,” the Bolton boss said. “I just wish he’d stop them overhead kicks because it is a long way down from where he gets to.

“I said for him to grow into the game on Saturday, give us a bit of energy, help us keep the ball at the top end of the pitch – and then he sprints 30 yards and smashes their centre-half into Row Z. That’s him taking it easy.

“But he gives us that physicality and edge at the top end of the pitch, some pace. And as I have said before he is under-estimated technically.

“He is versatile and I think he would be a good centre half. I think he’s one of those players who you could put anywhere on the pitch, and he’d give absolutely everything. That is why the fans have connected with him.”

Evatt spent his Sunday afternoon watching Liverpool’s senior team do battle with Manchester City, taking notes from two of the top managers in the game.

“As a young coach that’s still learning his trade and it was a fantastic game to learn from,” he said. “I listened to both interviews after the game and Jurgen Klopp probably gave away some more analytical detail than he normally does, which was interesting to hear.

“It was nothing new to me but was nice for him to explain it and how he tries to stop Man City.

“Obviously you all know I’m a huge Man City fan, not generally, but of the way they play and Pep. I thought they were excellent first half, but then second half adjustments that Jurgen made at half-time which he explained in his post-match and it was a lot more even and competitive second half. It was a really good game of football.”