'We owe the fans' - Sheehan calls for improvement against Gillingham 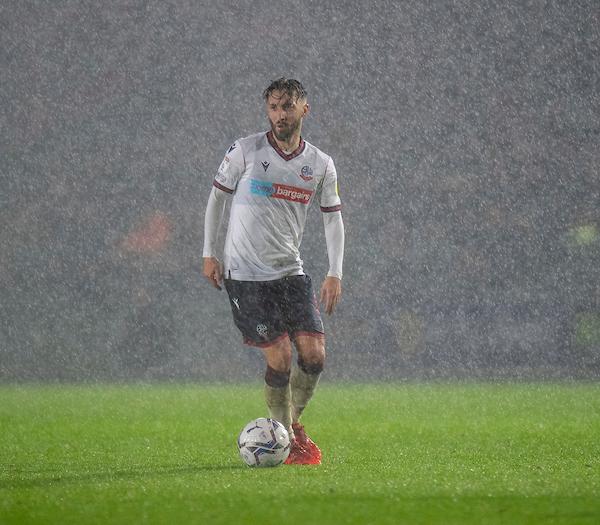 After the no-show against Wigan Athletic and a thorough soaking in defeat at Plymouth, there are grumbles of frustration among Bolton fans as their team slips off the boil.

Ian Evatt’s men have now slipped to 11th in the table and are as close to relegation as they are the promotion places.

But Sheehan is confident that spirits can be lifted in time for the visit of Steve Evans’ Gills, who start the weekend in 19th spot.

“We do owe the fans a performance, even the ones who came all that way to Plymouth to support us,” he said of Saturday’s game. “We know as players that it was an unbelievable commitment and we’re sorry we couldn’t get the three points for them. Hopefully we can put this last few days to bed.”

Tuesday night’s downpour prior to and during the game made for farcical conditions at Home Park, particularly in the latter stages of the game.

Sheehan joked that he had experienced worse.

“I was at Newport, don’t forget,” he smiled.

“I have played in worse, to be fair. It was bad towards the end but it wasn’t too bad for about 70 minutes, so there are no excuses whatsoever.

“It was frustrating again, really. It isn’t the idea start when you concede early and then it changes the whole gameplan. You shoot yourself in the foot and gives the other team a lot of momentum, it is uphill all the way from there.

“It is all the players’ responsibility. The gaffer went through everything that they were going to do before the game and they did exactly what we’d worked on.

“It isn’t so much changing a philosophy for the team, it is more the conditions. We should have done that, especially towards the end because it was unplayable, but it is a learning experience for us.”

Referee Keith Stroud and his team did have a check on the pitch before kick-off and correctly deemed it playable. But as the weather worsened, a different style of football was needed – and Sheehan concedes that Wanderers failed to react.

“If it was earlier it wouldn’t have been played, would it? We just had to get on with it, get the ball forward quicker and not messing about at the back as we did for the third goal,” he said.

“We have to learn quickly as a team. When there are bad conditions again, maybe we learn as a team to do better?”

Incredibly, Wanderers have conceded first in 11 of their first 14 games, and Sheehan says the mistakes made early on against Plymouth made for an unhappy mood in the dressing room.

“Nobody likes losing, do they? You work all week, through the season, then concede two early goals. It is frustrating and it doesn’t show what we are capable of doing,” he said.

“It is obviously something we are going to have to sort out because it has such a knock-on effect going through games.

“We are strong enough, mentally, to get through it and sort it out.”