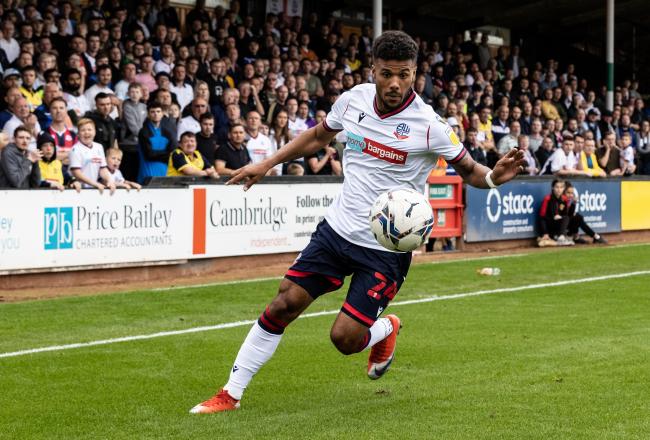 Elias Kachunga won’t lose sleep over his lack of goals for Wanderers.

The summer signing has yet to hit the back of the net in 21 appearances for Bolton – and his drought also extends to September last year in a Sheffield Wednesday shirt.

Kachunga insists, however, that things will change – and though he has played most of his games with Wanderers in a wide attacking role, the former Huddersfield Town man says he will get nowhere stressing about his lack of goals.

“To be fair, I don’t really put pressure on myself,” he told The Bolton News. “I know it will come with the games and if I get into these positions.

“I think if you just see me as a winger I could already have this season probably seven assists and then everything would look different. So then you would say, ‘you have so many assists’.

“Obviously it’s always nice to score. I keep working hard to come in this position and then to put the ball in the net.

“I was always a team player and for me it’s the team first.”

Kachunga has been praised by manager Ian Evatt for his work-rate and does have two assists to his name.

But the German-born 29-year-old feels his position within the team also has to be taken into consideration when assessing the lack of goals to his name.

“Yeah, I think especially as a winger, especially with the way the gaffer wants to play, so you have to press,” he said. “There are a lot of sprints to get the ball back first, but if you have the ball to go in behind or come short so it is not just being static and staying in your one position and just wait for the ball to come.

“Sometimes you have to sacrifice for the team, but at the end it’s a team sport and if everyone goes in the right direction, then we will be a really strong team because it’s not just only one person who can hold this team up and can just do everything on his own, so we have to work as a team. It’s not just me as well, it’s in different positions and if everyone is doing his job as team-mates, then we are a really good team.”

Kachunga also arrived at Bolton in August without a pre-season, and though he worked with a personal trainer following his release from Sheffield Wednesday he admits it has been an issue in settling at Bolton.

“I have more in the locker but this will come if I get more games,” he said. “You could see I get fitter as well and can go longer ways in the game, so this will come. As long as we improve as a team then I will improve as well.

“I came here without a pre-season and the team did well. The guys who played won a couple of games and I was in and out a little bit.

“Rochdale was a good start for me but I can improve a lot of parts of my game. It was a good performance and so now we want to build on it.”

Wanderers look to progress to the second round of the FA Cup tomorrow afternoon against National League Stockport County.

Billed as the Greatest Club Competition in the World on these shores and celebrating its 150th anniversary this season, Kachunga admits he only really learned about its value when he moved to the UK.

“I knew more about the Premier League when I was growing up but when I came over nearly five years ago to Huddersfield Town I learned very quickly about how important it is over here, and the history of the competition,” he said.

“I know all about it now and I know that it is a big trophy.

“Over here you have a lot of cup competitions and we are playing now in the Papa John’s, so sometimes if you are involved in quite a lot of them you might think that some are more important than the others.

“Maybe the bigger clubs do not take them as seriously so there are opportunities for clubs like us to achieve something.

“It is different for the FA Cup, there is a lot of tradition in there, so we want to go out there and get the win, then hope for a nice draw.”

Wanderers have not lost against non-league opposition in 110 years in the FA Cup but Kachunga feels the squad is in better shape after the midweek win against Rochdale.

“We go in wanting to win, especially after the difficult month we had,” he said.

“We started it with a win and we wanted to keep going. There are a few games at home, so we want to show we are a really strong team in front of our own fans.”