Not a tractor in sight!

Another 50 fines issued, we should have a sweepstake on how many of those are for Boris, i'll go 3.

Norpig wrote:Another 50 fines issued, we should have a sweepstake on how many of those are for Boris, i'll go 3.

Downing Street and Whitehall "the most fined location anywhere in Britain"

Don't the penalties get stiffer for repeat offenders?

I'll go for zero as this relates to a party Blojo didn't attend - they are still under investigation.

Just like to point out that there are approx. 3.5 million more people living in the UK than there were in 2016 all of whom need to be served - preferably civilly.


LONDON — One of the biggest donors to Britain’s Conservative Party is suspected of secretly funneling hundreds of thousands of dollars to the party from a Russian account, according to a bank alert filed to Britain’s national law enforcement agency.
The donation, of $630,225, was made in February 2018 in the name of Ehud Sheleg, a wealthy London art dealer who was most recently the Conservative Party’s treasurer. The money was part of a fund-raising blitz that helped propel Prime Minister Boris Johnson and his party to a landslide victory in the 2019 general election.
But documents filed with the authorities last year and reviewed by The New York Times say that the money originated in a Russian account of Mr. Sheleg’s father-in-law, Sergei Kopytov, who was once a senior politician in the previous pro-Kremlin government of Ukraine. He now owns real estate and hotel businesses in Crimea and Russia.
“We are able to trace a clear line back from this donation to its ultimate source,” Barclays bank wrote in a January 2021 alert to the National Crime Agency. The bank, which maintained some of the accounts used in the transaction, flagged the donation as both suspected money laundering and a potentially illegal campaign donation.

In the interest of "levelling up" should MP's daily subsistence allowance be reduced from £25 a day to 90p now that Lee Anderson has claimed folk can make a meal for 30p?

Lets all get a better paid job or work longer hours, it's really that easy isn't it?

Norpig wrote:Lets all get a better paid job or work longer hours, it's really that easy isn't it?

It's no wonder some of these MP's get targeted with abuse etc in the street.

The root of Tory economics right there. 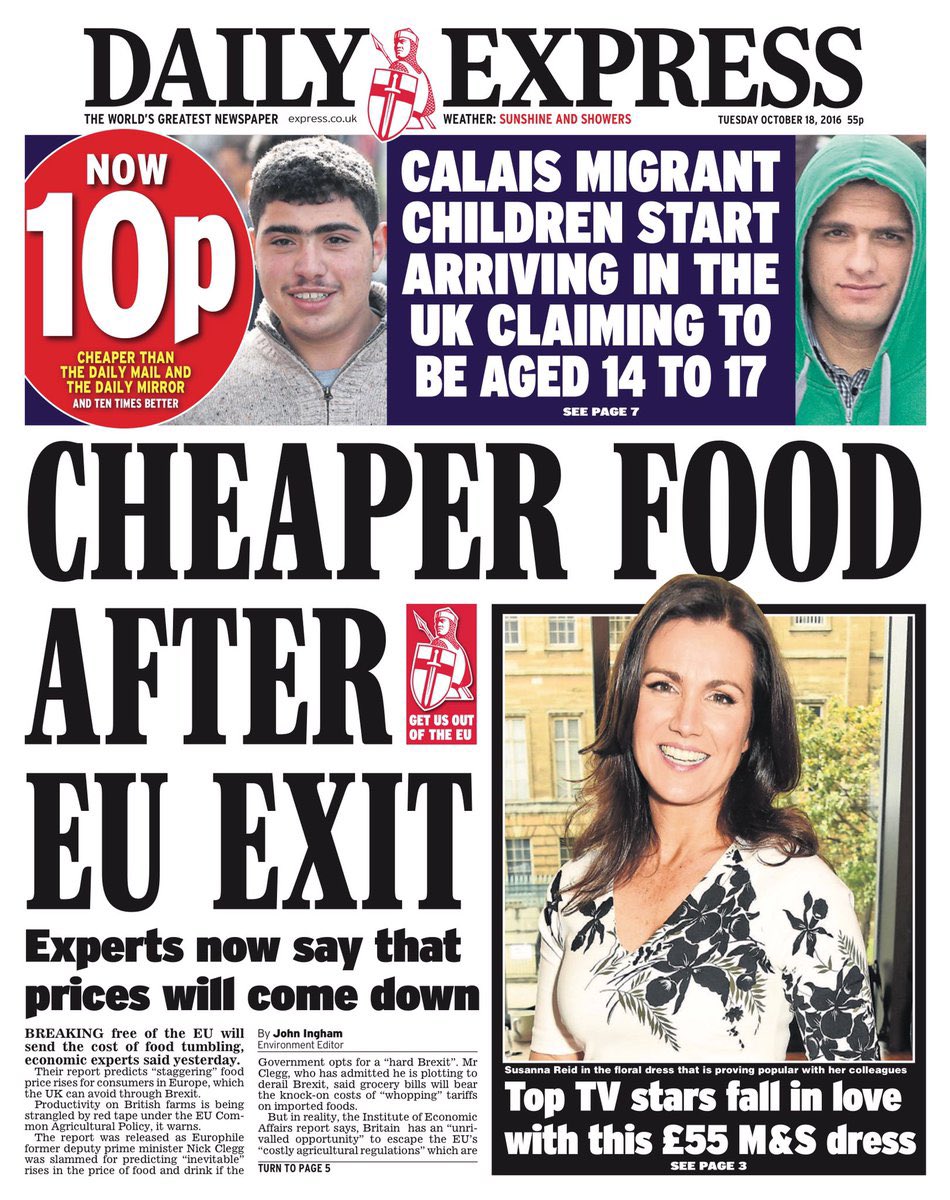 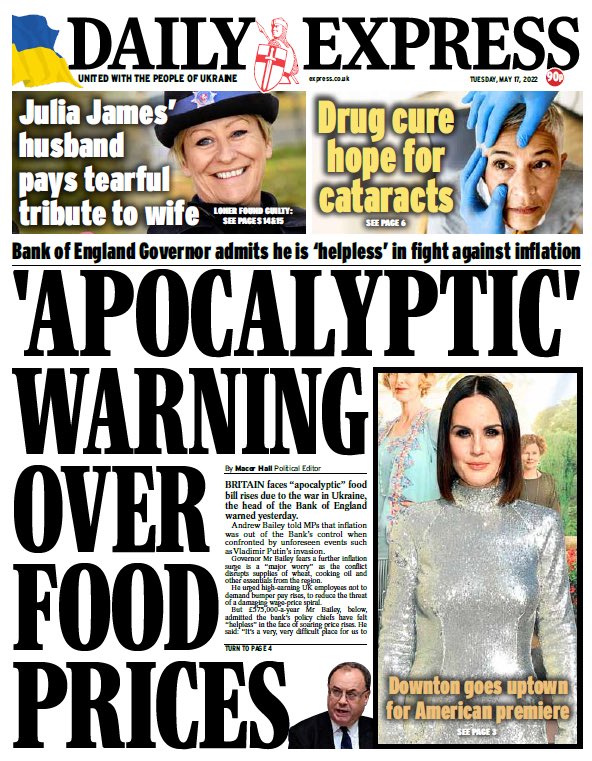 Interesting tactic from the government re the Northern Ireland situation. With Stormont in paralysis, businesses folding, prices rocketing, red tape doubling and VAT rates not on parity with the rest of the UK something definitely has to be done about Boris's trade deal, but what? This?

Liz Truss today spelt out the Government’s intention to table controversial new legislation that will hand it the power to strip out key elements of the trade deal it signed with the EU.
The proposed bill, expected before July, will provide ministers with the ability to scrap sections of the Northern Ireland Protocol in the name of protecting the Good Friday Agreement.
The plan is widely viewed as a threat to Brussels to change its stance on the protocol, without the UK actually tabling the legislation, in the hope the threat will flush out a fresh compromise from the EU.
But how likely is it that the plan will work, and what are the major hurdles standing in its way?

1. The Foreign Secretary has attempted to talk tough with the EU ever since she took over the mandate on the Brexit negotiations for the UK – but without much success. Ms Truss, backed by No 10, is going further still with her threats by pledging to lay before Parliament a new Bill that will tear up parts of an international treaty it has only just signed.
The attempted power play could result in Brussels reassessing its mandate and giving some ground for a compromise, but this would set a precedent the EU would want to avoid. Similarly, the UK could be forced into a climbdown, and wait to see what another Stormont election does for the DUP’s position in six months’ time. Finally, it could lead to London pressing ahead with its plans, passing the legislation and plunging relations with the EU into the deep freeze.

2.  The problem with threatening the EU with this new Bill, is the DUP – they of “cutting off their eyelids so they cannot blink in negotiations” fame – are not content with just a threat, and want this Bill enacted as law. The leading unionist party in Northern Ireland are refusing to take up power-sharing with Sinn Féin unless the protocol is overhauled in line with their demands – which is essentially for NI to be treated the same as GB when it comes to east-west trade.

That leaves the Government with very little wriggle room when it comes to dealing with Brussels. But ministers could take the view that the DUP has overplayed its hand, that the public’s opinion of its intransigence over the Protocol is low and that a future assembly election in Northern Ireland could see it knocked down from second to third. This could open up the prospect of Sinn Féin, should they win again, going into a power-sharing arrangement with the cross-community Alliance Party.


3.  Should the UK’s plan – to threaten the EU with the legal power to scrap parts of the Protocol – fail, and the chances of the DUP falling out of public favour appear slim, then ministers would be left to enact the legislation and enter trade conflict with its biggest trading partner. But is the Government seriously going to enter a trade war with the EU in the midst of a cost of living crisis?
While Brussels will be eager to avoid being dragged into such a stand-off, it may calculate that Boris Johnson’s position, which may even be politically weaker by this stage, would not be able to tolerate the bringing of yet more economic pain on to citizens and businesses. Even less so, ahead of a general election.

Tories vote down windfall tax on oil and gas giants who have profited massively from the war in Ukraine driving up prices.

Incidentally, it's been suggested that the UK currently has a gas surplus - so price rises are being justified on the basis of anticipated purchase price in the future rather than the price paid for it when purchased.

Not surprised by this TBH.

Yet another Tory MP arrested for sexual crimes, this time for rape and sexual assault over a seven year period.

Could initiate another by election.

There are rumours that Labour are going to attempt to force a Commons vote calling for an emergency budget to address the cost of living crisis.

Tory MPs will have to make a decision. On the one hand they were whipped into voting down the windfall tax on the gas and oil oligarchs which would have given families £600 to partially offset the price rises.

On the other, many Tory MPs have criticised Sunak for not acting on the cost of living crisis.
Personally I can't imagine Tory MPs defeating the government on this - or any other matter - as their priority appears to be retaining power.

No use having power if it's not directed at doing the right things for the country and communities they represent.

Eventually they will all have a long time to listen to their consciences, look back, and know that they let  themselves down, along with their citizens.

The trouble is that some seem to feel no shame.....yet!

okocha wrote:No use having power if it's not directed at doing the right things for the country and communities they represent.

True, but retaining power gives them the opportunity to introduce laws that will benefit their investors - in this case the oligarchs and the rich so they have a big incentive to retain power.
Theoretically they should also benefit business and the middle classes but they've made a right mess of that too - although those who have some wealth will be less badly affected than the poor, unemployed, sick and blue collar/lower paid workers who they don't give a monkeys about anyway, being the Tories.

Today, inflation hit 9% - the highest level of inflation in the UK since Thatcher - and there's little chance it will stop rising even further.

The danger is that will translate into a productivity issue which in turn could take us into a deep recession that will take decades to recover from.

Having said all that, this government is a populist government and is easily swung by public opinion so another policy U turn is very much on the cards.

Boris Johnson will not face a further Partygate fine, says No 10

Prime Minister Boris Johnson has been told he faces no further action after police closed their Partygate investigation, No 10 says.

They were both fined last month for breaking Covid laws at a birthday party for Mr Johnson in Downing Street in June 2020.

Metropolitan Police said the inquiry into lockdown breaches in and around Downing Street has now come to an end.

It resulted in a total of 126 fines, known as Fixed Penalty Notices, being issued for events across eight different dates.

Twenty-eight people have been issued with more than one fine, the force added.

The ending of the police inquiry paves the way for the publication of the full report by senior civil servant Sue Gray into lockdown gatherings.

The full report is expected to be published next week.

The Met said the eight events resulting in fines took place between May 2020 and April 2021, with different Covid rules in place at different times.

Acting Deputy Commissioner Helen Ball said whether an event had taken place in "someone's home" was a factor in deciding whether to issue a fine.

The Met said it would not be identifying any recipients of fines from its investigation, which had involved 12 detectives and cost £460,000.

The force added that its investigation involved examining 510 photographs, as well as CCTV images, emails, diary entries and witness statements.

Police also examined 204 questionnaires from people who were at the events. There were no interviews under caution.

No surprise really. He's got away with it as I always said he would. Smug bastard is laughing at us all again tonight just as he has been doing while spouting his ridiculous unbelievable lies over the last few months. He knew he was lying, we all knew he was lying (and taking the piss at the same time) and he knew that we all knew he was lying.
How embarrassing is it that a total charlatan like Johnson is the Prime Minister of our country. Just how low can we go.