For those of you new to the site, on the rare occasion we win a match I trawl through forums of the opposition to see what their reaction was to a defeat by Bolton. It's rarely pretty.

CareBare is looking forward to League 1....

CareBare79 wrote:Bolton haven’t won a game this season have they? I know our home form is terrible but if we can’t beat this shower at St Andrews then we deserve to be in League 1.

King Kevin is talking about you Scott!

ArseyAnya wrote:A week ago I’d have fancied 3 points with Dougie Freedman in charge of Bolton. But I fear Neil Lennon’s attitude will have a positive effect on Bolton and they will be too committed for us. Hope I’m wrong.

Jason8760 wrote:if we dont win dis one im gonna chop off mi nob and make the wife eat it

We've all been there. Your team is shit and the only way to get rid of the manager is to lose.

Clarky's Army98 wrote:fuck off Clark, why don’t the Birmingham board take a leaf out of boltons book and get rid of the tool in charge. I hope we get dicked.

I think something bad happened to Keith when he last visited Bolton.

KeithRodder wrote:I want to beat Bolton with every bone in my body. I hate everything about the shitty town. The people, the place, the fucking name even. COME ON YOU BLUES!!

BigWilly69 wrote:These fuckers lost at home to Bournemouth, we should be putting 10 past the cunts

The Watcher wrote:I hope Jermaine “I need 10 open goals to score once” Beckford is playing.

Tracy Hawkins is a slag.

LeeBlue1976 wrote:I’ve always hated Neil Lennon with a passion because he reminds me of Craig Patterson from secondary school. Craig Patterson was the biggest cockface I ever met, and he stole Tracy Hawkins from me when we were 14. I was gutted at the time, she used to let me touch her tits at lunchtime. It took me 5 years to get over being ditched for a ginger.

Lennon is an upgrade compared to Freedman & Coyle!

BrumBrum wrote:Bolton have got the manager they deserve, a fucking ginger wanker with no decent experience and fuck all brains. I hope they get relegated by January the fucking northern bastards.

So did I to be honest:

KatySpank wrote:I love Bolton, they rolled over on the last day last season to keep us up. I expect the same again today.

The word you are looking for JimJam is "ponces".

JimJam67 wrote:I really hate the way the media portrays Bolton as having spirit and guts when in reality they are the most spineless team in the championship

Before the game a bore-draw would have been progress!

Legend9000 wrote:Beckford on his own up top, Bolton coming for a bore-draw.

The game kicks off and the locals are confident:


We’re all over these twats, only a matter of time.

Lonergan keeping Bolton in it. Are we turning a corner?

This is good stuff for a change, we’re walking through their midfield.

Lennon is a cunt!

The inevitable does happen and Matt Mills puts Bolton in front. The Birmingham internet goes into meltdown:

Someone needs to get rid of Clark before he relegates us. I’m willing to pay big money.

Clark must go. He just has to.

Clark fuck off. Out of his depth.

Dave Kimble wrote:Once again we fail to mark the big giant defender from a corner. What the fuck do Clark and his coaching team do through the week, watch fucking Jeremy Kyle all day?

Is this Magoo's brother?

NelsonColumn wrote:My wife is withholding sex until we next win a home game. I have to face facts, I will be celibate for the rest of my life. Even the dog looked quite sexy last night.

JaneBCFC wrote:One down as usual, but Bolton have the worst defence in the league, we can still win this comfortably.

I bet Breadman already has his Birmingham A-Z out:

Zigic's Stepladder wrote:Feel sorry for the guys in the ground, they’d have been better spending the money on a blow job down Tilton Road. The ladies down there are far more professional than this shite.

Dougie never did it, so why should Clark?

Clarkhater wrote:We are going down, can’t see any other outcome when we can’t even beat bottom of the league. Clark needs to man up and fuck off.

As if Bolton could spank anyone!

[You must be registered and logged in to see this link.] wrote:Bolton on top now, could be a spanking. Koby Arthur is having a stormer, shame bloody Lonergan is on top form.

The half-time whistle goes and the Birmingham locals aren't quite so confident:

Fuck off Clark, resign you ballbag

disgraceful, my dead granny could organise them better

anyone know where I can buy a gun?

It looks like Clark got ClarkMustGoNow to ghost write his resignation letter:

I am a right twat with the tactical awareness of a dead mongoose.

LonelyPlaceMan wrote:I'm home alone again. We're 1-0 down again. I'd kill my wife if she wasn't already under the patio. There is still space for Lee Clark under there. You have 45 minutes to prevent another episode of Brookside.

Into the second half now and Lonergan makes a world class save to tip the ball onto the crossbar.


How the fuck did he save that?

best save you will see all season

I bet this is his one good game of the season

Lonergan was magnificent there. It's not our day.

what a lucky twat

Phil has a premonition:

Phil The Egg Sucker wrote:We're getting on top but you just know Bolton will hit us on the break.

Phil is proven right as Craig Davies is brought down by Birmingham keeper Randolph and sent off.


what da fuk was caddis doing there

Caddis made that fat twat Davies look like Usain Bolt

I just don't believe it, 10 grand a week to fall over like a cunt

ive run quicker with a dump hanging from my cheeks

someone send Lee Clark to Syria

But Craig Davies blazes the ball over the bar.

come on you blues we can still do this

Is Davies on our payroll?

Lennon you cocky cock, how do you like that?

someone in row z just got woken up

But Birmingham can't take advantage of the penalty miss and Bolton hang on to take the 3 points. Lee Clark gets the Dougie treatment:

Clark has to go

Resign or die, I don't care which

I hope your toilet blocks tonight

I'm shagging your missus right now Clark, screwing her like you screwed us

Beyond a joke now, do the board want to play Fleetwood?

Fuck you Clark, if I see your smarmy face one more time I'm going to kill my TV

We need to shout louder for Clark to go, we're too meek in these situations

Tiger Tim wrote:Terrible performance. Bolton simply wanted it more than we did. I have no doubt they will be pushing for the play-offs come May and we'll be down there with Blackpool staring into the abyss.

WayneBRFC wrote:Clark you cunt, just fuck off and die. Leave this once great club before you put us into League 1, or worse, out of business. Crap players, crap tactics, crap commitment, crap everything. How has he been allowed to keep his job so long? We stayed up luckily at Bolton last season so everyone conveniently forgot the previous 37 shite games, it's like we'd won the fucking league, not stayed in it by the skin of our teeth. Get rid now or we are doomed. And we won't be coming back.

Jobsworth wrote:we were unlucky, that was never a penalty and Mills pushed Caddis when he scored. I'm writing to UEFA about this miscarriage of justice.

Looks like Lee Clark has managed his last game:

LonelyPlaceMan wrote:I have dug a hole for you Lee, please arrive at my house no later than 6.15pm as it gets dark pretty quickly. Do you want to go in the ground dead or alive? Or should I just surprise you? Anyway, for your shit results over the last few years I am condemning you to eternity with my dead wife. Enjoy!

LonelyPlaceMan wrote:I'm home alone again. We're 1-0 down again. I'd kill my wife if she wasn't already under the patio. There is still space for Lee Clark under there. You have 45 minutes to prevent another episode of Brookside.

''someone in row z just got woken up''

Posts : 861
Join date : 2012-08-11
Brilliant stuff Nat. I'd forgotten just how much I enjoy your trips behind enemy lines when we win thanks to that twat Doogie.

Nat, it really has been way too long since we had one of these and it's brilliant to see it again, especially after a fifteen hour shift at work. Top stuff, thank you very much. 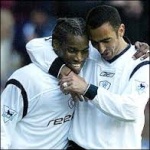