The mayor described the decision as ‘vindication’ and ‘truly fantastic news’ which will see a return to a bus service based around people and not profit.

It comes after a judicial review brought by bus firms Stagecoach and Rotala, who claimed Burnham’s bid to move to a franchising system where operators have to bid to run services under public control, was ‘irrational’ and ‘unlawful’.

However, sitting on Wednesday at the Royal Courts of Justice, Mr Justice Julian Knowles ruled that the mayor’s decision and the process followed were lawful.

Responding to the ruling today Mr Burnham urged the bus operators not to appeal the decision, asking them to accept it so that Greater Manchester can ‘crack on’ creating a London-style public transport system.

He promised the bus reforms would ‘benefit everybody’ with less congestion on the roads, a simpler public transport system and an improved quality of life.

Defending increases to council tax in April which are in part to pay for these plans, he said bringing buses back under public control is about ‘giving back’ an affordable integrated public transport network known as the Bee Network.

And the Labour mayor called on the government to back Greater Manchester with a package of funding to support the type of transport system the Tories have promised – and he hopes it will pave the way for other cities in the North.

He said: “In some ways, we’re going to help them to deliver on what they’ve promised to do. That’s why I’m saying form a partnership here.

“We’re ready to go, the more the government back us, the better it can be.

“But make no mistake, we will do this in any event.

“It’s just a case that the more the government support us with the funding that they’ve promised, the more we’ll be able to reduce fares, increase the frequency of services and get that change to the bus fleet so that it is more modern.”

Burnham expressed frustration with the delays caused so far, but said the first franchised services will be on the ground in Greater Manchester next year.

The mayor said he will reveal more details about the next steps with his bus plans on Monday when he sets out a vision for a ‘new era’ in the city-region.

Admin
Posts : 21506
Join date : 2011-12-29
I remember Bolton Corporation buses like the one below, which were open at the back (note the conductor changing the number on the rear of the bus as the bus is in motion!)

You used to be able to step off the bus when it got near to your stop without having to wait until the bus got to the bus stop.

However there was a knack to how you did this and I found that out the hard way! 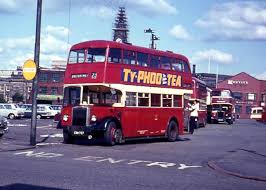 Posts : 16379
Join date : 2012-11-30
Age : 50
Location : Burnage, Manchester
I'm all for the buses coming back under public control. I use them all the time and fares are constantly going up and routes often scrapped because they don't make enough money according to the operators which does affect passengers especially older people who rely on those routes.

Norpig wrote:My earliest memory of the buses was the orange ones back in the 70's and 80's

Those are the ones I remember.

Norpig wrote:I'm all for the buses coming back under public control. I use them all the time and fares are constantly going up and routes often scrapped because they don't make enough money according to the operators which does affect passengers especially older people who rely on those routes.

Agree with this. Core things like this should never have been privatised.

We are now reaping the rewards of selling off the gas before.

Apparently took over on the 11th March, 1970 according to the link below - 52 years to the day as it happens!

Formation of the SELNEC PTE

Re: Buses to be brought back under public control for after 35 years

» Muamba dead for 78 minutes but brought back -
» Standing at football games to be brought back?
» Looking Back: Fans leaving Burnden Park brought traffic to a standstill
» Bradford City's fast start brought back bad memories for Parkinson
» Scene of the crime: Bolton head back to Stoke six years on