A FOUNTAIN in Bolton town centre turned soapy after pranksters appeared to add washing up liquid to the water.

The fountain outside Bolton Town Hall in Victoria Square was filled with bubbles after the prank this afternoon.

It is not known who the culprits are.


I know it is a bit of harmless fun and I've no problem the pranksters getting away with it but surely with all the CCTV cameras about these days isn't it a bit worrying that the Town Hall, the grandest and largest show piece building, smack in the centre of Bolton can be 'pranked' in broad daylight and no one is able to find out who did it!?!

I can understand them saying 'some youths were spoken too', or a drunken bloke was led away for an hour or so to sleep it off' or some such sort of 'wrist smacking' to whoever did it - but to say they don't know who did it, merely means to me that some others will soon be filling up the fountains with more 'fairly liquid' or more likely Morrison's low-price washing up liquid, in days to come.

I hope so anyway!

In my day we kidnapped Chinese medical students and sent letters composed of cut outs from newspapers to their parents in Shandong Province for a bit of a laugh.

Washing up liquid in fountains is amateur hour.

And it's been done before.

There was a craze in the late 80's which involved modifying a back pack with a hole in the bottom and a quick release dump valve so that you could empty the entire contents of your Catering Size detergent bottle into your target water feature in about 2 seconds without "the man" seeing you.

We  Whoever did it back then actually put some thought and effort into it.

I bet these fuckers just rocked up after about three pints of shandy in the Union Bar and emptied an already half-drained bottle of Head & Shoulders into it.

And then went back to the halls and Skyped Mummy to tell her how "hillaiweeus" it was and demand that another 500 quid be deposited into their bank account so that they could pay for their "gap yare in Tibet, yeah?"

You could just make out the Wimpy in the distance...

You could just make out the Wimpy in the distance...

Is the Wimpy still there?


Is the Wimpy still there?

It's a posh cafe now apparently. 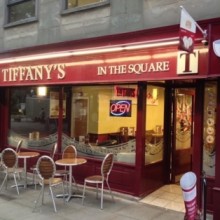 And no, I have no idea if Sam Leitch frequents it or not.

(Probably not actually, seeing as he's a figment of Bonce's imagination.)


Is the Wimpy still there?

It's a posh cafe now apparently.

And no, I have no idea if Sam Leitch frequents it or not.

(Probably not actually, seeing as he's a figment of Bonce's imagination.)

Ive had breakfast there


Even some random French bird knows him. Now come on!


''In Scotland, it's League Cup final day at Hampden Park, where Celtic meet Partick Thistle, who have no chance." Those were Sam Leitch's closing words on Grandstand's Football Focus on Saturday, Oct 23, 1971.