One last big pay day for Amir then with Kell Brook his dream match up I would suspect.

This from Amir who once said Brook was not worthy to be in the same ring as him - or something like that.

Problem is Brook might want bigger fish than Amir these days!

(Money usually talks in the end though). 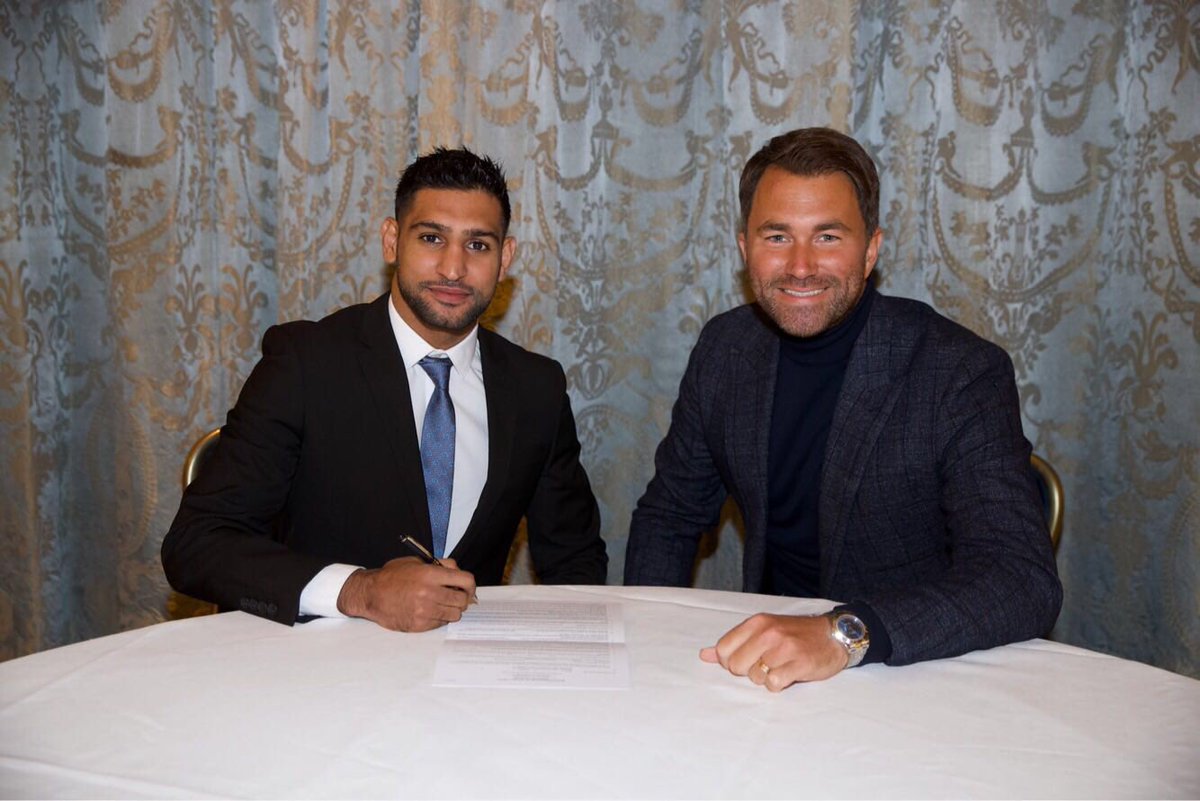 British boxing chiefs say they are "nowhere near" granting Tyson Fury a licence to fight and still require medical records to lift his suspension.
The British Boxing Board of Control suspended Fury's licence in 2016 owing to "anti-doping and medical issues".
Fury, 29, accepted a backdated two-year anti-doping ban in December and is working towards a return in 2018.
He tweeted on Wednesday that he would be "applying for my licence today" and would be back in the ring in April.
But the BBBofC has not spoken to Fury and insists the process "really can't move on" without medical records.

"We have a number of reports already in from when he was suspended," BBBofC general secretary Robert Smith told 5 live's boxing podcast.
"We will need up-to-date ones and then pass them on to our doctors and consultants. They will tell me if they need more but at present we are nowhere near that.
"I have spoken to Mick Hennessy [Fury's promoter], advising he'd like to get on with this as soon as possible and he did say he'd come back to me but unfortunately at this time he hasn't so it hasn't moved on yet."

AJ and Hearn are doing all they can to steer clear of Deontay Wilder  imo first big banger will do AJ and if Fury Can get fit he will frustrate AJ all night long.

I'd be surprised if he got a licence.

Angry Dad wrote:AJ and Hearn are doing all they can to steer clear of Deontay Wilder  imo first big banger will do AJ and if Fury Can get fit he will frustrate AJ all night long.

You could be right but you'd have to be brave to stand and trade with AJ, if you swing and leave yourself open and AJ connects then  you're hitting the deck without doubt. You're definitely right about Fury though. As much as I hate to admit it, because I think he's a complete tool, he's cleverer than he gets credit for and has the skills to frustrate a fighter like Joshua all night long.

AJ fights Joseph Parker in March for Parker's belt. After he has knocked Parker out it should set him up nicely for Wilder.

Reebok Trotter wrote:AJ fights Joseph Parker in March for Parker's belt. After he has knocked Parker out it should set him up nicely for Wilder.

Dont rule Parker out imo joshua is well over rated, the klit let him off, whyte staggered him, he's a bully and not nice at all a typical bullies attitude. He calls Parker a little boy parker says he's chinny so joshua says he wont shake his hand after the fight he's a cunt. If he ever agrees to fight Wilder which i doubt he will get trashed, Ortiz would do him as well, Fury would own him, he's already a fat cat.I really dont like this fucker.

I get the feeling that Joshua is already courting the media rather too much, and I think he could well be distracted by it all.

Amir Khan's "comeback fight" has been confirmed to be in Liverpool in April against former WBC International Welterweight champion Canadian Phil Lo Greco who says he is going to knock Khan out.
Probably will too.

i see the GGG vs Canelo rematch has just been announced, not paying PPV again after the last farce, it was never a draw first time round and is just an excuse to fleece more money out of fans.

Anyone fancy Parker to spring a surprise tonight? If he does it will be a mid to late stoppage unless he comes out quick and surprises him. I hope Parker wins and shuts up That slimeball Hearn.

Angry Dad wrote:Anyone fancy Parker to spring a surprise tonight? If he does it will be a mid to late stoppage unless he comes out quick and surprises him. I hope Parker wins and shuts up That slimeball Hearn.

Very possible despite the height, weight and reach disadvantage. Parker is WBO world champion and he didn't get that for nothing. He's more experienced than Joshua and will have to get inside to counter the 6" reach difference, and if he does and stays out of trouble, he could just do it. Still make Joshua the favourite, but anything can happen in a heavyweight bout as we have seen so many times before.

The other thing is that  don't remember seeing Joshua's chin being seriously tested so it will be interesting to see how he reacts if Parker can get a few decent digs in.

Klitschko gave his chin a workout,but he got off the floor to win. If Klitschko could have followed up,that fight might have had a different outcome.
Parker has a chance,but I still see AJ winning within 6 rounds. I won't be betting on this fight though.

Some of the things AJ's saying would worry me if i was a fan like if i lose i got a rematch clause!! Parker has not bothered with one. He seems to be bothered by this fight.

He seems a bit worried about Wilder turning up and challenging him in the ring says he will freeze him out of the picture if he does. Seems to me his bottle is going.

Not the best of fights.

Job done though for AJ.

Joshua is a cash cow for Sky, Hearn a loathsome creature and Sponsers, they gob off about Wilder but they have no intention ever of letting joshua anywhere near him ,Wilder will kill him in 1 or 2 rounds and they wont let Fury get a look in either he would school him and take the piss. That tonight was all Joshua has and it's poor he will get done if they ever risk him which they wont so they try to devalue Wilder and fury while calling them out but with no intention of going through with it. Hearn see's money in throwing Whyte into into Wilders destructive path he doesn't give a shit about Whyte he's expendable ,like i said Hearn is a loathsome creature. At least tonight his stupid blind fans will have at last realised he is not the new Mike Tyson and Certainly not in Foreman, Frazier and Ali's League he would not be in the top 10 rankings of the 70's and 80's he wouldn't even beat Joe Bugner or Frank Bruno as for Larry Holmes.

There was more excitement watching Cecil try to open a packet of Hobnobs.

I don't agree with celebrity refs and never have. How George Galloway got that gig is beyond me. The fight turned out to be rather boring although it was a comfortable pedestrian victory for Joshua. I thought the price fight was better.