What is it?
It’s bow’s orange sunset spring,
That quick step groove down the Grove Road,
It’s the blue smoke glamour of crack slab urban bohemia,
The richest man alive doesn't have a penny,
And I’m looking to cash in on his wisdom,
Looking out for the wise in his eyes and the ice in his next drink,
And his next drink,
And his next drink,
And his next drink,
I watch the world, its tower blocks headbutting the skyline,
So stitch that,
That slit in the sky like a knife gash, and a fallen sixties leather jacket,
The tenements so unlovely and kitsch,
And the people rolling on in our colours and classes, classes and colours,
The beats of New London,
Twisted by the bitter rhythm of the wrong education,
In the big schools,
On the bigger grey gothic, pink plastic flower estates,
Twizzling our biros and cashing our giros,
And it’s tupence for your philosophy,
And tupence for your dreams,
Fair ye unwell on the welfare,
And the state is a fair man-made maid,
It understands the sweet sickly pleasure of melancholy,
The malign happiness of the horrors,
Lick die happiness of the horrors,
Delights in the mystery of it’s own misery,
A modern love,
So here we are,
The fucked generation,
At the fag-end of the 20th century A.D.,
Young and still breathing,
But now it’s a trial,
Cause we tried it all and we’re tired by it all,
Too much, too young, too often, too many times,
And it’s too late,
But we’re not surrendering though,
Fuck no we’re not,
We’re on the offensive,
On all fours in the puddles of No Man’s Land,
And in that manner we move to the rhythms of ice cream vans playing ‘oranges and lemons’,
And police sirens spinning and waking their mythical wails,
Calling us to ourselves,
Opium for the elite,
Yeah, and there’s his illegitimate brother,
Inexpensively smacking the kids of Stepney, at a cost,
So let’s step out now, you and I,
Let’s go now and stay a while,
Underneath the sun,
A council street lamp left on in the middle of the day,
Tussling with gravity, branding skin,
And it will tussle and brand, tussle and brand until it explodes.
Tussle and brand until the sun explodes.

"Here is the church and here is the steeple. Open it up and here are the people!" Jake McHale.

But the Ale-house is healthy & pleasant & warm;

Besides I can tell where I am use'd well,

Such usage in heaven will never do well.


But if at the Church they would give us some Ale.

And a pleasant fire, our souls to regale;

We'd sing and we'd pray, all the live-long day;

Nor ever once wish from the Church to stray,

And we'd be as happy as birds in the spring:

And modest dame Lurch, who is always at Church,

Would not have bandy children nor fasting nor birch.

His children as pleasant and happy as he:

Would have no more quarrel with the Devil or the Barrel

But kiss him & give him both drink and apparel.

Guest
It was my nan that for me into poetry and this was her favourite;

I wandered lonely as a cloud
That floats on high o'er vales and hills,
When all at once I saw a crowd,
A host, of golden daffodils;
Beside the lake, beneath the trees,
Fluttering and dancing in the breeze.

Continuous as the stars that shine
And twinkle on the milky way,
They stretched in never-ending line
Along the margin of a bay:
Ten thousand saw I at a glance,
Tossing their heads in sprightly dance.

The waves beside them danced; but they
Out-did the sparkling waves in glee:
A poet could not but be gay,
In such a jocund company:
I gazed---and gazed---but little thought
What wealth the show to me had brought:

For oft, when on my couch I lie
In vacant or in pensive mood,
They flash upon that inward eye
Which is the bliss of solitude;
And then my heart with pleasure fills,
And dances with the daffodils.

There was a man called Bread
who cried when he went to bed
when he woke in the morn with a big fat yawn
Scott had pissed in his bed.

Mr Magoo wrote:There was a man called Bread
who cried when he went to bed
when he woke in the morn with a big fat yawn
Scott had pissed all over his head.

Life is such a precious Gift,
Until you need a Stairlift,
Then you wonder was it worth it,
All the pain and misery to survive it,

Of course it was, the Sunny days of Youth,
When you wasn't so long in the Tooth,
Endless days of playing in the Sun,
Laughing and Crying it was so much Fun,

You saw the Better side way back then,
Being able to play out till half past ten,
The Streets were Safer so they Say.
No Mister Bogey Man,
To go and Spoil our Joyous Plan.

I eat my peas with honey.
I've done it all my life.
It makes the peas taste funny
But it keeps them on the knife.

When im having a shit.
I think for a bit.
about bread for some reason.
its been another long season.
and when im wiping my arse.
i think what a farce.
we've been conned once more.
i might as well just shit on the floor.

See, I knew you lot had hidden depths.

I bet you all wish you had Scott's creative mind don't you?

I saw two boys upon a hill
And one of them was looking ill
So I gave the other one a pill
In case he caught it.

scottjames30 wrote:When im having a shit.
I think for a bit.
about bread for some reason.
its been another long season.
and when im wiping my arse.
i think what a farce.
we've been conned once more.
i might as well just shit on the floor.

Here's the classic "Waiting for the Bus"...


Think it was Rivington Spike who penned this baby. 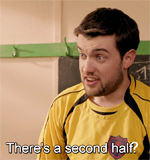 Roses are red,
Violets are blue.
We'll ship a late goal,
We always do.

One of my favourite poets, Charles Bukowski. Not the best of men, but a great writer.

Mary had a iron cow

Sluffy wrote:Mary had a iron cow

Re: The Poetry Thread

» The BBQ thread
» Bad poetry - Enough!
» poetry corner
» the nothing to say thread
» The Wrestling Thread